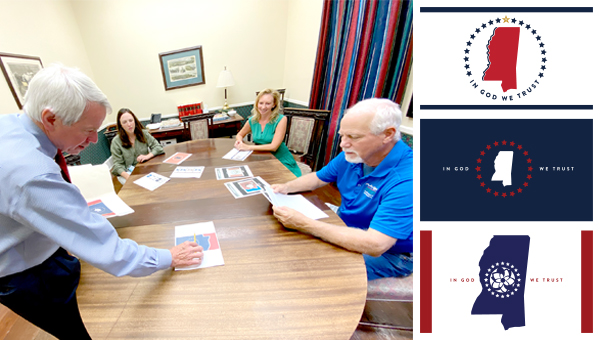 Vicksburg attorney Mack Varner, left, meets with the group he formed to create a proposed design for Mississippi’s new state flag. The group, whose design made it to the final nine before being cut last week, included Varner, Claiborne Cooksey, Lori Burke and Terry Winschel. Harry McMillan, not pictured, was also part of the local group. (Tim Reeves/The Vicksburg Post)

Nearly 3,000 submissions were presented to the Commission to Redesign the Mississippi State Flag and when it got down to the final nine, Vicksburg resident Claiborne Cooksey’s design was still in the running.

“I was thrilled that our flag made it to the top nine,” Cooksey said. “It was so neat to even be considered for Mississippi’s new state flag.”

Cooksey, who has a fine arts degree with an emphasis in graphic design from Mississippi State University, was asked to be part of a local group working to come up with ideas for the new state flag.

Local attorney Mack Varner, who was one of the nine people appointed to the Commission to Redesign the Mississippi State Flag, initiated the group, which also included Lori Burke; retired chief historian of the Vicksburg National Military Park Terry Winschel; and veteran battlefield expert Harry McMillan.

“I was called in to help bring the group’s ideas to life,” Cooksey said.

The group’s initial idea for the flag, Cooksey said, was to have the state of Mississippi in the center. Then in the center of the image of the state, have a circle of stars around a magnolia, finished off with bars on the sides.

Once Cooksey created the image reflective of the group’s suggestion, further tweaks followed.

“I would FaceTime into their meetings where we revised the flag many times, changing the colors, placement and size of elements,” she said, all the while trying to keep the design as simple as possible, which was one of the criteria set forth by the commission.

As a new mom, Cooksey said daughter June was close by during the hours she spent on the computer. “She was such a good sport,” Cooksey said.

Following graduation from MSU, Cooksey and her husband, Kurt, moved to Jackson where she worked for Rich Perspectives, a small advertising group.

“I learned so much about designing logos and elements for different branding projects during my time there. I also designed layouts for ‘The ‘Sip Magazine,’” she said.

After the couple moved back to Vicksburg, Cooksey worked for Visit Vicksburg as the marketing coordinator, where she promoted her hometown as a tourism destination through social media and print.

In creating the designs for the flag, Cooksey said, “I used Adobe Illustrator to create the flags and used Adobe Photoshop to create renderings of the designs as actual flags. This helped so much when choosing our favorites because we were able to see what they would really look like blowing in the wind.”

Cooksey said she had no intention of submitting a flag design to the commission since she didn’t have any great ideas. That was until Burke reached out to her about helping the group with their ideas.

“I jumped on board, so excited to be a tiny part of this time in history,” she said.

Cooksey’s final design features the shape of the state of Mississippi directly in the middle encircled by 20 stars on a white background.

“We realized that it was unique among other state flags to have the shape of the state on the flag, so we went with it,” Cooksey said.

She said her main goal was to keep the design simple.

“In the beginning, Lori and I agreed that something had to go, so we eventually dropped the magnolia from the first design and from there I believe we started moving in the right direction. We had a flag that was mostly blue with a red state that we all favored,” Cooksey said. “But you would never guess how many states have a blue flag. We eventually landed on the flag with the white background and blue border. I felt like it had a classy sense about it — fresh and clean. And it just felt different.”

One of the last suggestions from a group member, Cooksey said, was to also highlight the river along the edge of the state.

“I sent in several designs with that alteration and the commission’s designer took over from there,” she said.

While Cooksey’s design was not chosen in the top five, it had still been rewarding, she said, to make it as far as it did.

“I am so proud of her (Cooksey),” Varner said. “And the group that put this together.”

The Commission to Redesign the Mississippi State Flag, which has narrowed the proposals down to the final five, will present its final selection to the governor and Legislature on Sept. 2.  Then, the final flag design will be placed on the Nov. 3 general election for the voters of Mississippi to decide.

A majority of the votes cast in November must be in favor of the flag for it to become the state’s new flag. If it doesn’t get the votes needed it back to the drawing board, he said.

Cooksey said if the new flag is not voted in, she would be “thrilled to help” again.

“Everyone should feel proud to fly their state flag,” she said. “My hope is that the new design, this new flag, would bring unity to all Mississippians and be something that we can all get behind.”

Charles Leonard Katzenmeyer Jr. was a decorated World War II veteran who fought from the cockpit of a fighter-bomber and... read more