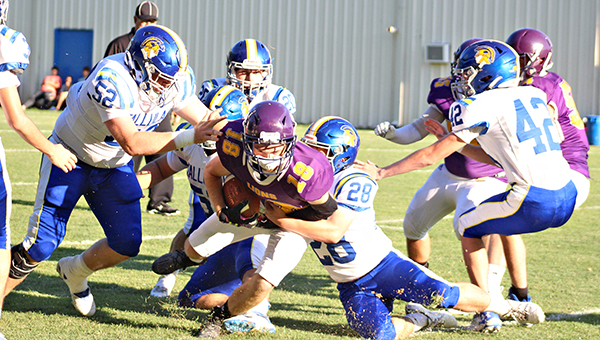 Tallulah Academy was knocked off the top of the MAIS eight-man football mountain last season, but showed Saturday night that it didn’t fall very far down the slope.

Walker Sullivan had 213 total yards and three touchdowns, sophomore quarterback Dee Morgan threw three touchdown passes, and the Trojans heated up after a choppy start to crush Union Christian 48-14 in their season opener.

Tallulah coach Bart Wood said it wasn’t a bad performance by his team, which has won three MAIS eight-man championships since 2014, but there is still some work to do.

“I was proud of the effort. We did great in some things I didn’t think we were, and then we didn’t in other things,” Wood said. “Nothing really stood out. It was a team effort, and that’s what I think this is, is a good team and not individuals.”

Tallulah never trailed after Sullivan scored on a 14-yard run with 7:16 left in the first quarter, but also did not really get revved up until a few drives later. Its offense committed turnovers on the next two possessions following Sullivan’s touchdown.

The second turnover was an interception that Union Christian’s Slade Berry returned inside the 10-yard line before fumbling. Morgan, who had thrown the pick, recovered it and returned it back across the 30-yard line. Sullivan capped the wild sequence by breaking off a 67-yard touchdown run two plays later, and his twin brother Carter added the two-point conversion run to give the Trojans a 16-0 lead.

“I think the heat got to us, with starting at 6 o’clock. We had some first-game mistakes that are normal. But other than that, I was proud of the boys,” Wood said of the early missteps. “It’s not having a scrimmage, having a so-so jamboree, and starting the season so late.”

Sullivan’s second touchdown was a turning point in the game. Tallulah scored on each of its three second-quarter possessions, all in the last 4 ½ minutes, to blow the game open.

Marsh Wood, a 275-pound senior lineman, continued the avalanche by catching a crossing route from Morgan and then outrunning a defender to the end zone for a 37-yard touchdown with 4:12 left. Linemen are eligible to catch passes in eight-man football, but it was still Wood’s first offensive touchdown. He also caught a two-point conversion pass later in the second quarter.

“I had a couple in the scrimmage, but that was the first one in a real game,” Marsh Wood said. “(The defender) was in my shadow and I could see him catching up to me, so I kind of was scared. It was fun.”

Morgan hooked up with Walker Sullivan for a 61-yard TD pass with 3:11 left in the second quarter, and then threw a 55-yard TD pass to Carter Sullivan with 15 seconds to go to push the lead to 40-0 at halftime.

Arnett Sevier finished Tallulah’s scoring with a 3-yard run early in the third quarter.
Union Christian scored twice in the second half against Tallulah’s second string — including a 98-yard touchdown pass from Cross Talley to Berry — but with the clock running because of the MAIS’ mercy rule it never threatened to make a miracle comeback.

Tallulah will have an open date next week, and then is scheduled to play Delta Streets Academy in its home opener on Sept. 4. That game might be moved, however, because of political tension and COVID-19 concerns in Louisiana.

Saturday’s game was moved to Porter’s Chapel Academy in Vicksburg — it was originally scheduled to be played at Union Christian — because Louisiana’s MAIS teams are not allowed to play in their home state. Louisiana’s public schools have delayed the start of their football season, possibly until October, and the state’s independent schools have been under some pressure to do the same.

With an uncertain future ahead, Bart Wood said he took a bit of a different approach to this season opener and encouraged his players to do the same.

“I told the boys to play like it’s your last, especially the seniors, because it might be the last game you ever play. They might say next week that we’re done,” Bart Wood said. “You approach it a little different. I played some boys a little bit longer than I would normally. But I wanted to give my seniors a little bit of playing time. I wanted to play them as much as I could, because it could be their last.”

Porter’s Chapel Academy kicker Daniel Llopis kicked a 25-yard field goal, a PAT, and had a touchback on a kickoff... read more