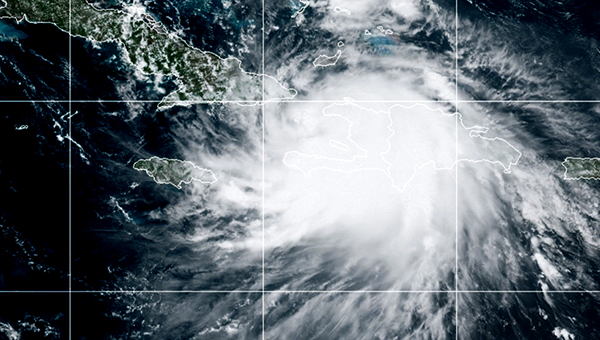 State and local officials are keeping a close eye on Tropical Storm Laura as it makes its way toward the Gulf of Mexico, but a National Weather Service meteorologist said Sunday it is still too early to tell what the storm’s impact will be to Mississippi.

And Laura’s projected track could change between now and when it makes landfall along the Gulf Coast.

“We are watching the (storm’s) track,” said Thomas Winesett, meteorologist with the National Weather Service office in Jackson. “We expect it to pass over the Dominican Republic and have interaction with Cuba. We’ll have a better idea of the track when it passes Cuba. Right now, it’s hard to determine.”

About 10:15 a.m. Sunday, according to a National Hurricane Center advisory, the center of Laura was about 95 miles southeast of the eastern tip of Cuba, with maximum sustained winds of 50 mph. It was moving west-northwest at about 21 mph.

The storm is expected to move over the central and northwestern Gulf of Mexico Tuesday night and Wednesday and strengthen into a hurricane Tuesday night.

A preliminary forecast track the storm released 11 p.m. Saturday predicted Laura as a hurricane making landfall between New Orleans and Baton Rouge Wednesday and passing over Warren County Thursday as a tropical depression.

Sunday morning, the National Hurricane Center’s 11 a.m. advisory predicted the storm making landfall somewhere near the Texas/Louisiana border and then turning northeast and being in Arkansas Friday as a tropical depression.

Winesett said the storm’s track could change once it reaches the Gulf of Mexico, but added if the 11 a.m. forecast track holds, Mississippi and Warren County could get some minor effects from the storm.

Winesett said Tropical Storm Marco, which is predicted to become a hurricane Sunday, is encountering wind shear, which is causing it to weaken, and the storm is expected to weaken quickly once it makes landfall.

The 11 a.m. National Hurricane Center advisory on Marco had the storm about 475 miles southeast of Lafayette, La. with 70 mph winds and moving north-northwest at 14 mph.

Winesett said some areas of South Mississippi may experience 30-40 mph winds from the storm.

Couple paddling Mississippi: ‘There’s so much good in the world’

It’s the challenge of a lifetime for Nate Denofre. “I’m pretty tough, but this is pushing my limits,” Denofre, a... read more