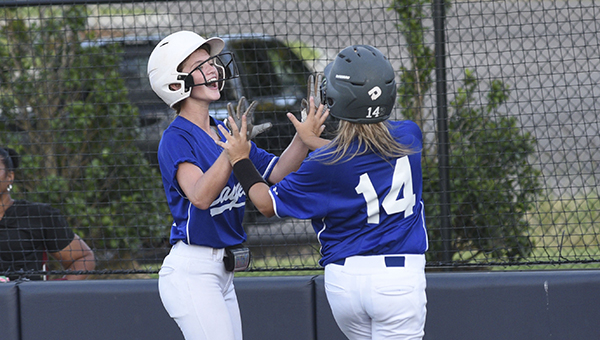 Slow and steady wins the race, but fast and steady won a softball game for Porter’s Chapel Academy on Monday.

The Lady Eagles scored at least two runs in all but one inning, and banged out 13 hits total to beat Greenville-St. Joseph 15-4 at Sports Force Parks on the Mississippi.

Olivia Masterson only had one hit, a double, but walked once and scored four runs.

After giving up three runs in the top of the first inning, PCA quickly recovered. Three straight hits, including an RBI triple by Tillman and an RBI double by Masterson, brought in two runs, and Masterson scored on an error to tie the game.

In the second inning, Bufkin singled and scored the go-ahead run on Tillman’s double, and the Lady Eagles never trailed again. They added six more runs in the second inning to take a 10-3 lead, and then added to it each frame after that to eventually win via the mercy rule.

Masterson led off the bottom of the fifth inning with a walk and scored the game-ending run on Thornell’s RBI single.

Kyleigh Cooper pitched five innings for PCA. She only allowed one run after a shaky first inning, walked two batters and struck out two.

Park Place broke open a close game by scoring 10 runs in the third inning. The first eight batters reached base as the Crusaders extended a slim two-run lead to a 15-3 advantage.

For St. Al, Ali Grace Luke finished 2-for-3, with one RBI and one run scored, and Victoria Moorehead was 2-for-3 with two runs scored.

HATTIESBURG — Southern Miss announced Monday that it will not sell single-game tickets this football season, and will limit attendance... read more