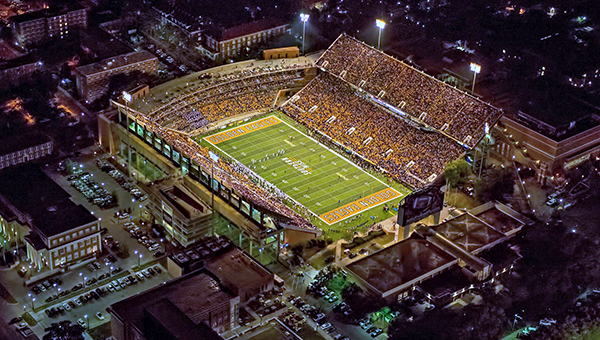 HATTIESBURG — Southern Miss announced Monday that it will not sell single-game tickets this football season, and will limit attendance to 25 percent capacity at M.M. Roberts Stadium.

Southern Miss’ attendance policies largely follow the guidelines laid out by Gov. Tate Reeves in an executive order issued last week, but it did expand on how tickets will be allotted for the approximately 9,000 fans allowed through the gates at each game.

A total of 1,000 general admission student tickets will be reserved — how students can claim them will be issued soon — and the rest will go to season ticket holders. No single-game tickets will be available.

Tickets will also be digital only on a mobile device.

In accordance with the governor’s order, tailgating and outdoor social gatherings are prohibited before the game. That includes all picnics, fanfare areas, the Eagle Walk, Junior Eagle Funland and fan tunnels.

In the stands, fans will be encouraged to stay 6 feet apart from people who are not in their household, and designated “safe zones” will be marked off for fans who prefer more distance.

Face coverings will be required to enter the stadium and when fans are “in transit” to common areas such as concession stands and restrooms.

Concession stands will accept cashless types of payment such as Apple Pay, Google Pay, Samsung Pay, Tap & Pay, and of credit and debit cards. A limited number of cash transactions will be available.

On-campus parking will be limited to those attending games, and will open four hours before kickoff. Parking instructions will be sent as part of the digital ticket package.