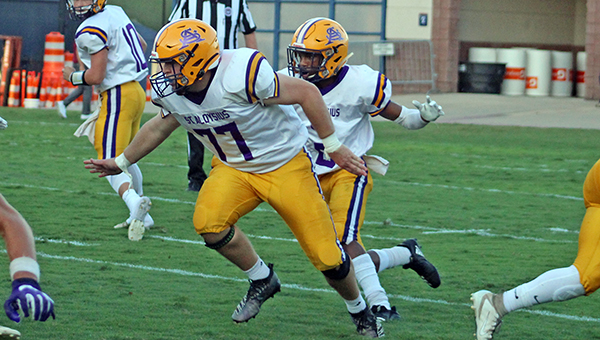 After wading through months of uncertainty and change, reaching the 2020 football season opener was a blessed relief for the St. Aloysius Flashes.

It also was not exactly a moment to remember.

Hartfield Academy rolled up nearly 300 rushing yards and cruised past St. Al 43-0. Upon further review, however, St. Al coach Stacy Sizemore said it wasn’t all bad. He said he found some good things after looking at the game film, and remains optimistic that the Flashes can still do well this season. The turnaround, he hopes, will begin with this Friday’s home opener against Greenville Christian.

“In my experience, sometimes the film is not as bad as the game,” Sizemore said. “They’re playing hard. They’re competing. It’s just a matter of execution. You can see things that are there, and we’re maybe one step away or didn’t wrap up tight enough. It’s just one little thing.”

The loss to Hartfield continued a bad trend for St. Al. It was the program’s 14th consecutive loss in a season opener, and dropped its record to 1-11 in games played in August since joining the MAIS in 2015.

“They’re a good football team with a lot of athletes and some size,” Sizemore said. “We’re going to have to play mistake-free football and focus on doing our job.”

The key to this game, Sizemore added, is that even if Greenville Christian is a good football team, they’re probably not at the same level as a Hartfield squad that is considered a Class 5A championship contender and simply outmatched St. Al.

Hartfield converted several key third downs early in the game to jump on the Flashes 15-0 by the end of the first quarter. Its defense did not allow a first down until the last 90 seconds of the first half, when the score had swelled to 36-0.

Sizemore said the Flashes executed their game plan, but Hartfield did things a little bit better and faster.

“You look in the paper and it says we didn’t score or gain a lot of yards. But then you look at the film and we know our assignments. It was just a case of being overmatched,” Sizemore said. “If we were perfect right now I’d be a little nervous about the season because we’re peaking too early. We’ll clean up some of those mistakes and get better.”

Self-improvement, Sizemore added, was the real focus early in the season. The District 3-5A opener is next week at Central Hinds, so cleaning up their own mistakes and getting better at what they do needs to be the Flashes’ primary goal this week as much as earning a win.

“We want to prepare ourselves for our opponent, but I want to worry about us,” Sizemore said. “I want to focus on fundamentals and the things we do really well.”

Tallulah Academy running back Walker Sullivan had 213 total yards and scored three touchdowns in a 48-14 win over Union... read more