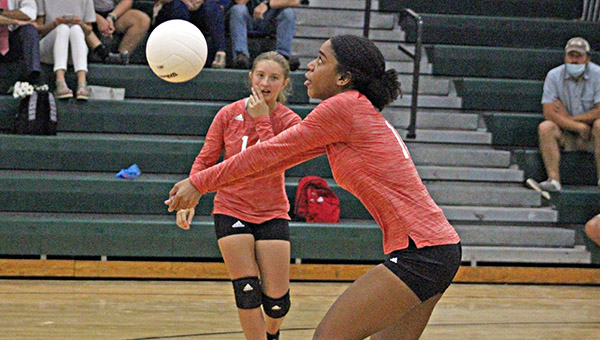 The 2020 volleyball season opener between Warren Central and Vicksburg High was a snapshot of sports in the COVID-19 era.

Fans wore masks while an electrostatic air purifier quietly did its work behind the scorer’s table. Players’ temperatures, and not their uniform numbers, were written alongside their names on the roster.

Vicksburg Warren School District athletic director Preston Nailor ran around with a spray bottle filled with sanitizing solution before the game, spritzing volleyballs and hands. That came a few moments before both teams celebrated senior night, at the beginning of a season that could end at any time.

Warren Central won the match 3-0 (25-8, 25-18, 25-11). The result didn’t seem to matter much, though. Getting back on the court after months of uncertainty and change, and enjoying a sport they love, was a victory in itself.

“I was glad to get a game in, because I’ve already lost five games. I’ve lost six games in September. We don’t know which way the COVID-19 is going to turn, so let’s get out here and play,” said Vicksburg coach Deborah Brown, who has had to cancel nearly a dozen games so far because other programs have opted s play to have fun. I told my seniors that this might be your last game, so I want you to play like it is your last game.”

Senior night is usually the final home game of the season. But, because of the possibility that this season could get cut short if there is another spike in COVID-19 cases locally or statewide — and the fact that neither team plays another home match until mid-September — the seniors for the Lady Vikes and Missy Gators were honored prior to the game.

“Coach Gullett called and asked, ‘What do you think about us having senior night together?’ I said we’re in the same town, why not? Let’s go for it. So we came together. I think it was good, like a family affair because the girls know one another,” Brown said.

On the court, players from both teams said they were glad to return to action. Tuesday’s opener was delayed two weeks from its original date by a ruling from the Mississippi High School Activities Association that followed a statewide spike in COVID-19 cases earlier this summer.

The opener also marked the start of a busy stretch. Both teams will play Thursday — Warren Central is at Pisgah and Vicksburg has its region opener at Ridgeland — and again on Saturday in a four-team round robin tournament at Warren Central Junior High. No fans will be allowed to attend Saturday’s matches.

“It’s exciting, because this quarantine? I just can’t do it,” Vicksburg senior Sha’Kora Knight said. “I’m really excited because I get to play with my teammates for my last year. It’s just fun to play with them. COVID-19 has messed everything up.”

Warren Central senior Megan Garner said she felt fortunate to be back in school, and on the court.

After wading through months of uncertainty and change, reaching the 2020 football season opener was a blessed relief for the... read more