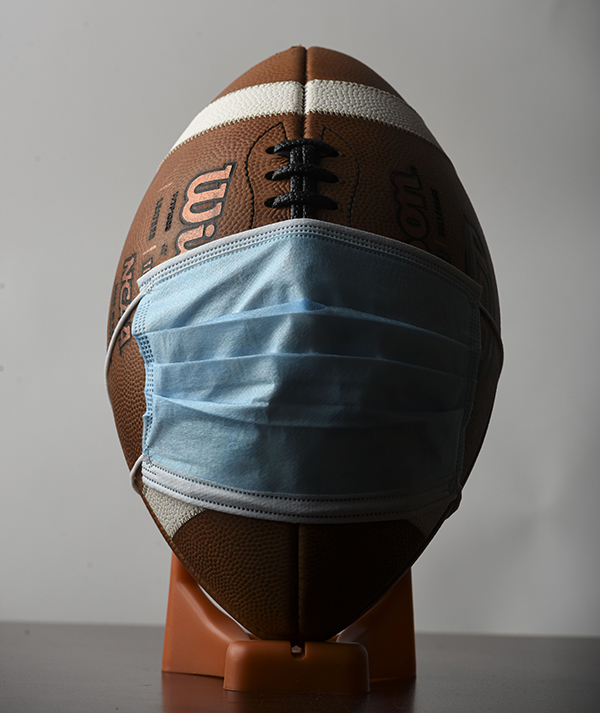 The COVID-19 pandemic has forced a number of teams across Mississippi to cancel their football seasons, and those that remain to adjust their ways of doing business. (Courtland Wells/The Vicksburg Post)

Playmakers 2020: COVID-19 pandemic casts a shadow over the season

It has been a summer like no other for Warren County’s high school football teams.

Coaches added digital thermometers to the list of necessary equipment, along with whistles, helmets and pads. The water cooler became a relic of the past, almost overnight, replaced by pallets of bottled water. At practices, players wore a different kind of facemask and left gear scattered around the edges of the field.

Sportsmanlike handshakes and high-fives were not only discouraged, they were banned. A dirty uniform is acceptable, but a dirty football is not.

Welcome to Football 2020, where the COVID-19 virus has ended longstanding traditions and ushered in new ones on an almost daily basis. Where the old way of doing things has been quickly replaced by a new normal and an uncertain future.

“Never in the history of the United States has anybody had to deal with this,” St. Aloysius head coach Stacy Sizemore said. “But just like every other coach in America, you worry about your kids’ health and your coaches’ health. You never want to put them in an opportunity to get sick, so we are mindful of that, and we’re doing everything we can to protect us. I’m cautious, but not cautious enough where it drastically changes my core values. We’re going to continue to work hard, and listen to people, and social distance, and clean everything.”

THE NEW NORMAL
The onset of the COVID-19 pandemic in March brought the sports world to a grinding halt. Spring sports seasons were canceled en masse, including high school baseball, softball, track and field, tennis and golf in Mississippi. It wasn’t until June that offseason workouts were allowed to resume, and even then it was with a number of new — and seemingly strange — guidelines to help stop the spread of the disease.

Players and coaches were to maintain proper social distance during practice, mostly by breaking into smaller groups for weightlifting and conditioning workouts.

Everyone has had their temperature checked and was screened for symptoms upon arrival each day. Most teams assigned a coach to the task, whose job it was to stand guard at the entrance to stadiums or fieldhouses and then run down and scan anyone who slipped past.
Footballs and other equipment were to be regularly sanitized, even if they were put back into play a few moments later.

“If there’s ever a time where smaller numbers are a benefit, it’s been this offseason for us,” said Porter’s Chapel Academy head coach Blake Purvis, who has about 30 players on his roster. “We’ve had to make some adjustments to split them into smaller groups to get them in the weight room and keep our numbers down, to follow the guidelines that have been set forth.”

More than 40 new regulations were put into place. Vicksburg coach Todd McDaniel said it quickly became routine, however, and looked at the extra work as the cost of being able to play.

“It’s pretty much the norm now,” McDaniel said. “We’ve been in it five or six weeks. We’re just continuing to sanitize everything, the kids are showing up every day and we’re doing temperature checks. We’re wearing masks during practice, even on the outside. It’s almost normal now. It’s just things we have to do for our program to be able to continue on. We’ll see what guidelines they bring up next.”

As of mid-August, no cases of COVID-19 were reported among Warren County’s football teams. The next phase of the season, however, will present different challenges.

Unlike the summer workouts that focused mostly on conditioning and skill work, and could be done outside, in-season practices include a lot of indoor activities. Teams regularly gather in rooms for meetings and film study, as well as other workouts like weightlifting as part of their weekly preparations. Even getting dressed for practices will reduce the ability of players to socially distance.

WHAT WILL IT LOOK LIKE?
According to MaxPreps.com, 11 states have pushed their high school football seasons to the spring of 2021. Twelve others, including Mississippi and Louisiana, delayed the start of the season by at least a couple of weeks.

More than two dozen school districts in Mississippi have announced they will not play at all this fall. The list includes Claiborne County, which includes Port Gibson High School; and Jackson Public Schools, which includes several opponents of Vicksburg High and Warren Central.

The Mississippi High School Activities Association will start its season on Sept. 4. The Louisiana High School Athletic Association has reportedly decided to wait until October.
The Mid-South Association of Independent Schools, which has members in Mississippi, Louisiana, Arkansas and Tennessee, is pressing ahead, however. Its season began Aug. 14, and preseason scrimmages the week before that provided the first glimpse — and test — of new game day procedures aimed at allowing football to proceed during the COVID-19 pandemic.

At a three-way scrimmage between Porter’s Chapel Academy, Tensas Academy and Glenbrook Academy on Aug. 7, players from all three teams had their temperatures checked upon arrival. Visiting teams were checked and cleared before they were allowed to get off the bus.

PCA’s field has a capacity of 1,200 fans, and under Mississippi state guidelines was limited to 25 percent of that. The 217 fans that did attend the scrimmage were safely under the number. Many did not wear masks in the 93-degree heat, but they did separate into small clusters scattered around the field. Only about 40 sat in the bleachers on either side, and the rest were in lawn chairs or standing along the fences.

Purvis, who is also PCA’s athletics director, said every school was still feeling its way through the various protocols. He also admitted there was some pressure on the MAIS schools to do it right, since they’re the first ones playing.

The MHSAA released a number of guidelines in August, but those were not hard rules. Vicksburg Warren School District athletics director Preston Nailor said ADs and administrators around the state planned to refine the guidelines into workable policies.

The MHSAA’s guidelines included an increased emphasis on digital ticketing options; limiting band attendance and performances at games; educating students and staff on COVID-19 developments; aggressive screening of players, and isolating those who test positive for the virus; and an emphasis on hygiene.

Players who test positive for COVID-19 are prohibited from participating in practice or games for 14 days from the date of their diagnosis.

Along with smaller crowds, there is a real possibility that the game day atmosphere for high school football will be radically different in 2020 from what it has traditionally been. The Vicksburg Warren School District prohibited fans from attending a preseason scrimmage at Warren Central, and restricted attendance at the Sept. 4 season opener between Vicksburg and Warren Central to less than 200 fans.

Whatever needs to be done, coaches and players said, they’re willing to do it.

“We care about the fans and the bands and all that, but as long as we get a chance to play, that’s all that matters,” Vicksburg High quarterback Sha’Kori Regan said.

Morgan said he and his fellow coaches will try to keep learning and adapting to an ever-evolving situation. Morgan pointed to how quickly the summer guidelines became policies as an example that teams will follow whatever is set forth if it means playing the game they love.

“It’s kind of like the first day of summer workouts. We’ve learned so much from day one that we evolved the next several weeks, to being proactive and seeing what didn’t work. I imagine it’ll be a lot like that,” Morgan said. “We’ll have a plan, and see what fits us, and what’s functional, and how we can make it the very best we can while we’re taking care of everybody.”

IS IT WORTH IT?
A summer spike in COVID-19 cases in Mississippi brought with it a fresh wave of concern about whether it was safe to reopen schools or play sports. Nearly half of the 130 college teams in the Football Bowl Subdivision will not play this season.

So, the big question for Mississippi’s teams appears to be. is playing football worth the risk?

Their answer is a resounding “yes.” From helping private schools financially to providing a positive outlet for teenagers, Warren County’s coaches firmly believe the risks can be managed and the positives outweigh the negatives.

“In the grand scheme of things, does the result on Friday night matter? No. COVID is real. It is a concern. But high school athletics, in my opinion, are a major part of high school academics, especially in the independent schools,” said Purvis, a PCA alum who is entering his fifth season as the school’s head coach. “Athletics help the majority of independent schools stay open. Athletics, as a whole, are very important to our association (the MAIS) and to our member schools to be able to keep our doors open and to be able to continue to offer quality Christian education in years to come. Without athletics, there are some private schools that may not be able to stay open, and then what is the ripple effect of that for those communities moving forward?”

Morgan, who played at Warren Central and Mississippi State, said the game teaches life lessons that are important and irreplaceable.

“It’s important. These kids just want to play. It means a lot to them. It means a lot to us as coaches,” Morgan said. “This game does a lot for young men. We take a great deal of pride in developing our young men for the rest of their lives out here. It’s not just a game, by any means. Once you start something you like to see it through. That’s all these kids want.”

The Vicksburg Post welcomes your items for the Game Plan. Submit items by email to sports@vicksburgpost.com for publication Wednesday or... read more