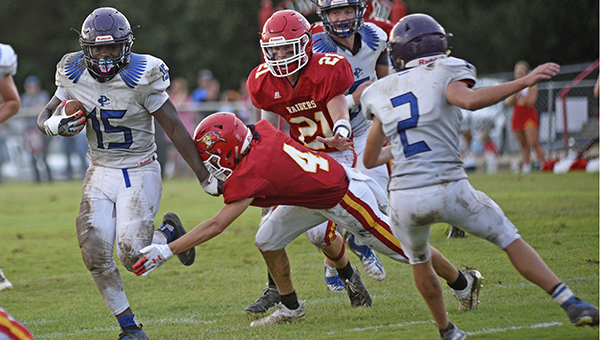 Porter’s Chapel has sights set on a rare winning streak

It’s only Week 2 of the season, and win or lose this game won’t count for Porter’s Chapel Academy in the MAIS playoff picture. It’s even a different brand of football.

This is, however, one of the more pivotal games the program has seen in a while.

The Eagles have a 1-1 record on the season, following last week’s 10-0 victory over Newton Academy. Another win Friday over Deer Creek (0-1) would not only carry that momentum forward, but provide something PCA has not had lately — a winning streak.

PCA has not won back-to-back games since September 2017, and has only done it three times since 2012. With a chance to push the program forward, head coach Blake Purvis was not about to undersell the importance of a seemingly unimportant game on the schedule.

A lot of good things happened for the Eagles last week. They did a 180-degree turn from a humbling 46-12 loss to Benton Academy in the opener by combining solid defense with a couple of timely big plays on offense against Newton Academy.

The game’s only touchdown came on a 45-yard run by Tyler Washington. Another long run by Braden Kapp set up a field goal in the second quarter, and a third by Brayson Morson picked up a key first down late in the fourth quarter that allowed PCA to run out the clock.

After conquering the challenge of rebounding from a loss, the Eagles face a different one this week — adjusting to a completely different style of football.

Friday’s game will be the first of two in a row that the Eagles will play under eight-man rules. An imbalance in the MAIS schedule caused by a lack of teams in the association’s smaller classifications led to the odd setup in both 2019 and 2020. The second eight-man game is next week, at home against Claiborne Academy.

PCA split the two eight-man games last season, losing 52-22 to Deer Creek and beating Claiborne 32-22. There are a number of new players on the roster or in starting roles this season, but Purvis said he still feels his team is more prepared for the transition this time.

Besides having been through last year’s game prep, the Eagles got some eight-man reps in a preseason scrimmage against Tensas Academy three weeks ago.

“I definitely think we have a better idea than we did last year going into this,” Purvis said. “Even though we had played eight-man in junior high prior to this, getting to it in the high school level and really figuring some more things out in eight-man at a deeper level, we were not prepared for when we played Deer Creek last year. After that, we figured a lot out and were able to get it right against Claiborne in the second week of this cycle. Hopefully we’ll be a little bit ahead of that this year.”

The really tricky part, Purvis added, is continuing to play at the level the Eagles reached against Newton while literally playing their opponent’s game. Handling that adjustment over the next two weeks, he said, will be a test of character as much as skill.

“With so many new guys, you felt like they were finally getting it last week and now you’re fixing to change everything on them,” Purvis said. “Our guys have been resilient and I think they’ll handle it fine. But it is going to be very difficult. We’re going to try to keep things as similar as we can for them in verbiage and things like that so it will help in the transition.”