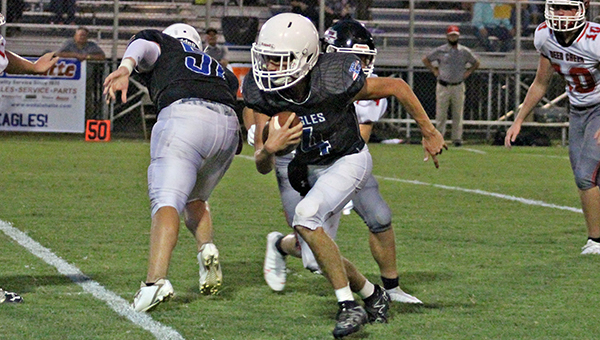 Porter’s Chapel Academy quarterback Jace Riggs breaks free from a Deer Creek defender for a big run in the first half of Friday’s game. Riggs ran for 67 yards and two touchdowns to lead the Eagles to a 43-20 victory. (Ernest Bowker/The Vicksburg Post)

Tyler Washington and Brayson Morson each ran for more than 100 yards, the defense forced four turnovers, and the Eagles won back-to-back games for the first time since 2017 by beating Deer Creek 43-20 on Friday.

“It feels great. I’ve been here for three years and this team has something to prove and we’re going to prove it all season,” Washington said. “It’s intensity. When we have to face tough teams, we’re not afraid. If they smack us in the face, we’re going back in there for retaliation. We’re not giving up for anybody.”

PCA (2-1) also matched its win total from last season by Week 3 of the 2020 campaign, and can better it next week by beating Claiborne Academy in another game played under eight-man rules.

PCA has only won more than two games in a season once in the last six years. The last time it entered September with a winning record was in 2013, when it won its first two games before losing five of the next six.

“When you win two in a row, that’s always a good thing. You can’t win three until you win two. That’s always been my thing, is the most important game is the next one, and it was good to take care of business, adjust to an unusual week and answer the call,” PCA coach Blake Purvis said.

Ethan Allegrezza led Deer Creek with 103 rushing yards and one touchdown. Quarterback Noah Allegrezza ran for 73 yards and a TD, and threw a touchdown pass.

Washington finished with 118 yards and a touchdown for Porter’s Chapel, and Morson had 113 yards and two TDs. Quarterback Jace Riggs added 67 yards and two touchdowns on the ground as PCA amassed 359 rushing yards as a team.

It could have been more. Two long touchdowns, one each by Washington and Morson, were negated by penalties. Those were two of the 14 penalties for 124 yards that PCA committed, but Purvis wrote most of it off as adjusting from 11-man to eight-man football two games into the season.

“Some of that is playing in a lot more space. You’re blocking guys in a lot bigger area, and that’s going to lead to some holding calls,” Purvis said. “In eight-man, when you’ve got guys cutting back left and right you’re going to have blindside blocks and guys reaching and holding. So a lot of that is a product of the game and us not being used to playing it.”

The touchdowns that did count for PCA were enough to push it comfortably in front by halftime. Washington scored on a 2-yard run on the game’s opening series, and then Riggs on a 6-yard run early in the second quarter.

Deer Creek got a 29-yard touchdown pass from Ethan Allegrezza to Noah Allegrezza in the first quarter, but gave up 10 points in 25 seconds late in the second to allow PCA to blow it open.

Gage Ashley blocked a punt that was recovered by Deer Creek in the end zone for a safety with 1:21 to go. On PCA’s ensuing possession, Morson ripped off a 33-yard touchdown run and Washington added the two-point conversion to make it 25-6 with 56 seconds left.

Deer Creek twice got within two scores in the second half, on a 21-yard run by Noah Allegrezza early in the third quarter and a 53-yard run by Ethan Allegrezza on the opening play of the fourth. Each time, however, PCA had an answer.

Riggs ripped off a 33-yard touchdown run with 2:40 left in the third quarter to put PCA ahead 31-12. After Ethan Allegrezza’s touchdown got Deer Creek within 11 points, Morson capped a 3 ½ minute drive with his 16-yard TD run to make it 37-20.

PCA finished the game with another three-minute-plus drive that ended with a 26-yard touchdown pass from backup QB John Wyatt Massey to Ricky Carraway with 1:49 to go.

“Having a coaching staff to help and see things, and prepare these guys, we were able to adjust and answer to different things. And then of course the depth helped us tonight. Being able to sub guys in if they were hurting us because a guy was getting tired. All of those things contributed to that,” Purvis said. “Depth is always an advantage. We played everybody on our sideline tonight, and they all stepped up and did a good job.”