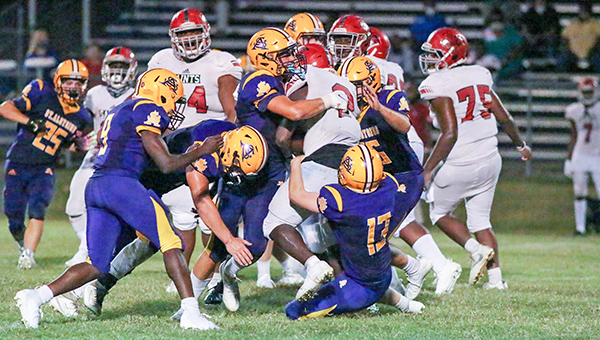 Two weeks into the season, the St. Aloysius Flashes are still looking for some offensive punch and a victory.

St. Al ended its scoreless streak at six-plus quarters with a 42-yard field goal by Reed Bourne, but failed to score a touchdown for the second consecutive game and lost 18-3 to Greenville Christian in its home opener on Friday.

“We have to decide on what we’re going to be on offense,” St. Al head coach Stacy Sizemore said. “We have to focus on one thing and get better at it. We’re still searching for our offensive identity, whether we’re a spread team, an I-formation team, a pistol team, what have you. We have to sit down as coaches and figure that out.”

Josh Martin threw three touchdown passes for Greenville Christian — one each to Mario Magee, Amarian Jones and Daric Campbell. Two came in the first half, and another early in the third quarter to stake the Saints to an 18-0 lead.

St. Al helped Greenville Christian (1-1) along by committing four turnovers. Three of them were lost fumbles, and the other was an interception on the final play of the game.

“They were loaded with athletes and we just couldn’t put it together,” Sizemore said. “They were able to throw the ball on us. They hit us with some big passes and did a good job getting open. We have some work to do in the secondary.”

There were a couple of bright spots for the Flashes. Senior Brennan Williams intercepted two passes on defense, and led the team with 38 rushing yards.

“Reed kicked that field goal, and he got off some really good punts. They didn’t come after him and he had time to kick it,” Sizemore said.

St. Al will go on the road to Central Hinds next week for its MAIS District 3-5A opener, and then returns home for two games against Parklane and Riverfield. It’s not an easy stretch, especially for a team that’s struggling, but Sizemore said he is encouraged by the fight his team has shown so far.

“We’ll keep working and get it figured out,” Sizemore said. “They give everything they have, and I’m OK with that. As long as we play hard, I can live with that and we’ll fix the mistakes.”