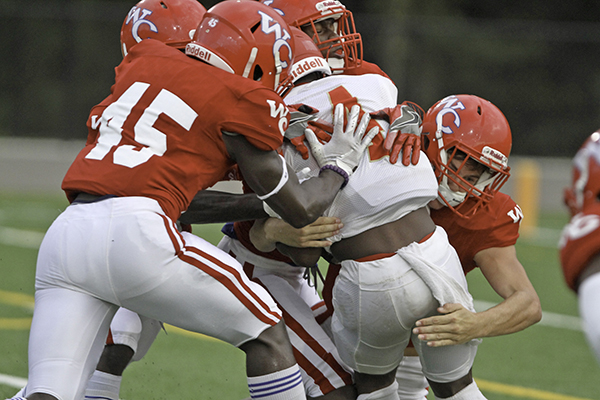 Warren Central defensive lineman Steven Watts (45) and some of his teammates wrap up a Holmes County Central runner during a preseason scrimmage Friday at Warren Central. (Paul Ingram/For The Vicksburg Post)

Sports column: This football season will be like no other

The Mid-South Association of Independent Schools has been playing football for almost a month now, but the full start of the season comes this week when the Mississippi High School Activities Association and college football kick off.

The first FBS game of the college season will be Thursday night in Hattiesburg, when Southern Miss hosts South Alabama. It will mark the start of a season the likes of which we haven’t seen in generations, if ever.

Since football and organized sports in general really became a thing in the early 20th century, they have continued mostly unabated. Many college teams canceled their football seasons during World War II, but military teams joined the traditional powers and the sport kept on trucking. Ranked in the top 10 of the final Associated Press poll in 1943 were institutions called Iowa Pre-Flight (No. 2), Great Lakes Navy (No. 6), Del Monte Pre-Flight (No. 8) and March Field (No. 10) — all military bases stocked with top players who had been drafted into the armed forces.

In Mississippi, the high school season went on as scheduled during the war years. The COVID years, however, are a different story. More than two dozen teams around the state, including Port Gibson and seven schools in Jackson, canceled their seasons before they began. Seven of Mississippi’s 10 college teams have either canceled or postponed their seasons until spring, and the junior college programs won’t play until October.

The rest are pushing forward, but the specter of COVID-19 is still hanging over everything. Some teams are canceling or forfeiting games after outbreaks on their rosters. Simple game day routines like bus rides and getting water are changing forever. Vicksburg coach Todd McDaniel said his players planned to ride with the windows down on buses to improve ventilation when social distancing is impossible.

Attendance at games will be limited. Fewer than 200 people, rather than the normal 2,000, are allowed in the stands for the Red Carpet Bowl this coming Friday between Vicksburg and Warren Central. College stadiums will be capped at 25 percent capacity.

As strange, unusual and unpleasant as this season will be, we must remember that it could be worse. Just look across the Mississippi River, where Louisiana’s public school season is in limbo and its MAIS members are having to sneak across the border to Mississippi and Arkansas to play. Or look to other states that canceled the season entirely rather than risk a COVID-19 outbreak.

Is playing sports a good idea from a public health standpoint? You can make the case that it isn’t, since they draw large crowds of people sitting in close proximity for several hours. Unfortunately, the crowds pay the bills so it’s hard to play sports without them.

That, though, is an entirely different discussion. Here in Mississippi, we’re going to give it a try. No matter what happens this fall, we’ll know one way or the other if this was a good idea or bad, if it’s possible to live a normal life or whether we will be ruled by a microscopic virus.

In this case, football really is more than just a game. It’s a show of courage. Win or lose, let’s all applaud the effort when our teams take the field this fall.