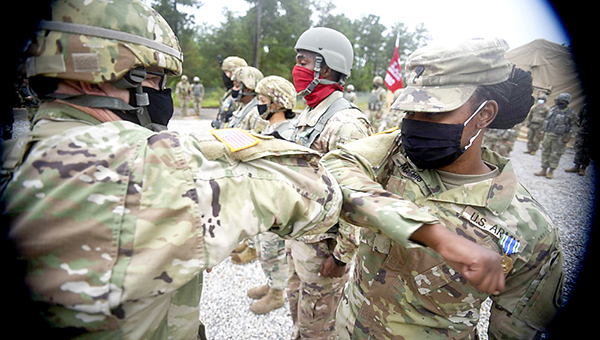 During the training exercise, the command was presented with unexpected, impromptu scenarios that tested military problem solving and decision-making skills. Operation Castle Rock fit squarely into one of the main mission elements of the U.S. Army Reserve: increasing critical engineer capabilities in order to modernize and maintain expeditionary combat power, with an emphasis on COVID-19 countermeasures.

The U.S. Army Reserve continuously focuses on soldier health and safety, but that focus was made even sharper by the COVID-19 variable, as 412th TEC warfighting cells worked shoulder-to-shoulder within a mobile tactical operations center.

Reacting to COVID-19 meant checking soldiers’ temperatures twice each day, overall health observation, providing hand sanitizer and multiple hand washing stations, as well as mandatory face coverings. Additional mitigation efforts included reducing the operational staff on the ground by nearly half, with the remainder of the 412th TEC staff acting as a rear support element. The operational capacity, however, was minimally affected.

“The COVID environment definitely changed the way leadership approached this training event,” said Maj. Gen. Stephen Strand, 412th TEC commanding general. “Some soldiers were given the opportunity to complete their part of the training in a virtual setting. Those who were here, even with their missing partners, were able to learn more skills and cross-train. You want the whole unit to work together, all the time.

“The challenge going forward is integrating all the Soldiers operating virtually during this exercise into real-world warfighting functions,” Strand said.

A significant injection of junior enlisted, officer and non-commissioned officer involvement was another key factor in the success of Operation Castle Rock, according to Robbins.

“They’re the future. If the mid and lower-level enlisted, NCOs and officers can get something out of this, that’s where we’ll get the biggest bang for our buck,” Robbins said.

“They acted like the Soldiers they are, and performed well above standard,” Martin said.

Martin also spoke to the critical support of the 475th Explosive Hazards Coordination Cell (Krakens), a detachment of the 412th TEC.

“They are the commanding general’s asset in the field when it comes to anything that goes ‘boom,’” said Martin. “I was very impressed with their level of professionalism.”

While there is no way to eliminate all risks of COVID-19, mitigation measures enforced by the 412th TEC continue to safely return soldiers to their Families by operating in compliance with Centers for Disease Control, Department of Defense and U.S. Army guidelines.

“I think it’s been a great success,” said Command Sgt. Maj. Benny Hubbard, command sergeant major of the 412th TEC. “With us being an expeditionary headquarters, we’ve done exceptionally well in mitigating the spread of COVID-19. We are overcoming this enemy.”

Body found Saturday night behind grocery store has been identified

Officials have declared no foul play was involved in the death of a man found behind a Vicksburg grocery store... read more