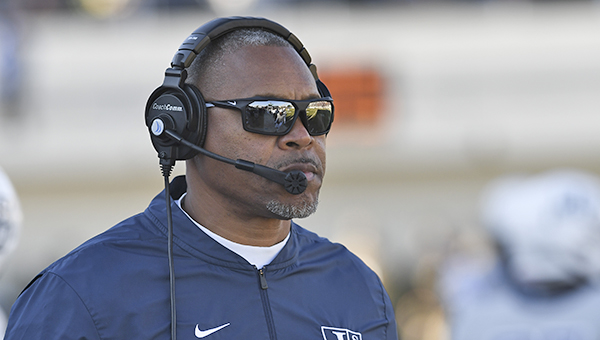 Jackson State football head coach John Hendrick will not have his contract renewed after less than two seasons in the job, the university announced Monday. (Courtland Wells/The Vicksburg Post)

JACKSON — For the fourth time in seven years, Jackson State is looking for a new head football coach.

Jackson State director of athletics Ashley Robinson announced Monday that Hendrick’s contract will not be renewed for the 2021 spring season.

Hendrick was Jackson State’s coach for one full season and part of another after taking over for Tony Hughes midway through the 2018 season. He compiled a 6-9 overall record and was 5-5 in the Southwestern Athletic Conference.

Offensive coordinator T.C. Taylor and offensive line coach Otis Riddley will be retained to lead the football program on an interim basis, JSU said in its statement announcing the move.

Hendrick’s dismissal marks the fourth time since 2013 that Jackson State has parted ways with its head coach. Harold Jackson, Hughes and now Hendrick have all lasted less than three seasons apiece, and the Tigers are 21-40 under their collective regimes.

Jackson State will play a spring schedule in 2021 after the SWAC postponed its season because of the COVID-19 pandemic. The Tigers will play six regular season games starting February 27 against Mississippi Valley State.

“In consultation with (university president Thomas) Hudson and after a thorough review and evaluation of all aspects of our football program, I have decided that a change in leadership is in the best interest of our program and university,” Robinson said in a statement. “I want to thank Coach Hendrick for the hard work he has done with our football program. I wish John much success in the future.”

Hendrick has coached at 15 college programs during a 37-year career. He was also the head coach at Benedict College in Columbia, South Carolina, from 2003-06.

Hendrick was hired as Jackson State’s defensive coordinator in 2016, and promoted to interim head coach in 2018 when it was announced late in the season that Hughes would not have his contract renewed.

Hendrick went 2-1 during his trial run and was promoted to the job on a full-time basis, but the Tigers lost five of their first six games in 2019 and finished 4-8.

Sports column: This football season will be like no other

The Mid-South Association of Independent Schools has been playing football for almost a month now, but the full start of... read more