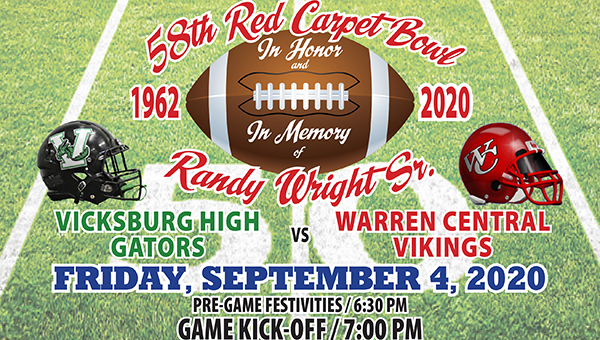 A new executive order from Gov. Tate Reeves issued Monday will expand attendance limits at high school sports events — but it will not lead to an increase in available tickets for Friday’s Vicksburg vs. Warren Central football game.

Athletic director Preston Nailor said the Vicksburg Warren School District would stick by its ticketing policy for the game, which allocates two tickets for each senior football player, band member, cheerleader and dance team member participating in the game.

A total of 148 tickets went out earlier this week, and those that are not claimed by Thursday will not be resold. More than 2,000 people attended last year’s River City Classic.

At a special meeting last week, the VWSD Board of Trustees made the decision to limit ticket sales for Friday’s game to prevent it from becoming a “super spreader event” for the COVID-19 virus.

“We planned for it with the possibility that the governor could issue a new order. That decision was made by the board to protect people in our community,” Nailor said.

There will still be plenty of options to see and hear the game for the thousands of fans unable to attend in person. It will be streamed online for free on the VWSD’s Facebook and YouTube pages starting at approximately 6:50 p.m. Kickoff is at 7 at Warren Central’s Viking Stadium.

This will be the last game broadcast for free on the streaming platforms. Beginning next week — when the attendance limits will also likely be increased to the state-allowed 25 percent of capacity — games will air on the NFHS Network for a fee.

Fans who have scored tickets and will attend the game will have their temperatures checked at the gate, Nailor said. Anyone with a temperature over 100.4 degrees — the benchmark symptom of a COVID-19 infection — will not be allowed in.

Fans must also wear masks while traveling to their seats, or throughout the stadium. Masks can be removed while seated, provided fans are observing social distancing rules.

The seniors who are eligible to get tickets may purchase them from their respective head coaches or band directors, Nailor said.

“We delivered those tickets to the respective coaches (Monday). They can purchase tickets up until Thursday,” Nailor said.

Warren Central and Vicksburg played other teams in a preseason scrimmage last week, but no fans were allowed to attend. A Vicksburg vs. Warren Central volleyball match last week was the first regular-season event in the school district, and Nailor said there have been no issues with COVID-19 or compliance from fans or teams.

“We’ve had volleyball games, the last football game, and everything has gone well. Everybody has been on board with everything. The coaches that traveled last week even gave us their temperature logs on the bus,” Nailor said. “Our whole focus is to give our kids a chance to play as many games as they possibly can, and to keep them safe while doing it.”

In addition to being the season opener and the annual Warren County rivalry game, Friday’s matchup will serve as the 58th annual Red Carpet Bowl. It’s the first time Vicksburg and Warren Central have faced each other in the game, and also the first time since 1991 that the Red Carpet Bowl will be a single game rather than a doubleheader or tripleheader.

This year’s Red Carpet Bowl is dedicated to the memory of Randy Wright, Sr., the owner of Goldie’s Trail Bar-b-que who died in 2019.

Playmakers 2020: Months of work goes into the 40 seconds it takes to call a play

The situation seems simple enough. It’s second-and-2 from the 35-yard line, early in the second quarter. The next play will... read more