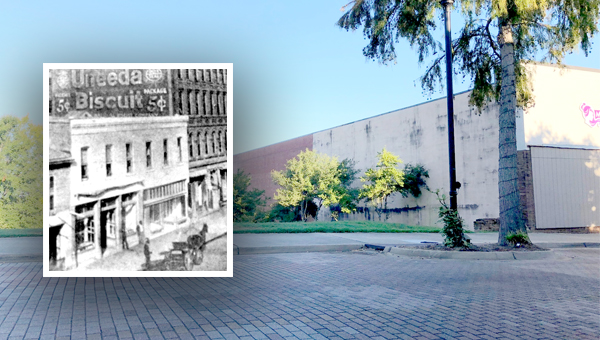 Before the property became vacant in the 1970s, this lot at 1526 Washington Street was home to a number of businesses, including a grocery and saloon that reportedly sold 300 barrels of whiskey in the four months leading up to prohibition in 1909. (Submitted photos)

Looking Back: Now vacant, this downtown property had a busy history

The left half of the building at 1528 Washington St. was built as a one-story building in 1896 for John Brennan’s saloon and grocery by the Spengler Company. It replaced a one-story antebellum building that had housed T. Brennan Grocery, where John clerked and also lived with his family.

The right half (1526) and the second story on the left were built in about 1906. An article in the Monday Morning News stated that Brennan maintained a “well stocked bar, wherein is displayed everything possible in the way of fine liquors and cigars; and purity, in the most absolute sense,” and that “Mr. Brennan has all the elements of personal popularity and his friends are legion among all classes, and his assistants are most courteous in every way.”

One of these assistants, Charlie Hude, was written up in the Vicksburg Herald in August 1905 because of “an interesting package” that he had received. “It was a small express package containing a phial in which was imprisoned a mammoth specimen of the stegomyia fasciata sent to him by a friend in New Orleans — the genuine yellow fever transmitting species seen through a microscope or told with the naked eye. The points of the insect are distinctly marked and as the species is quarantined it can be easily seen to compare with the skeeters whose influence is felt in this section.”

By 1906, Brennan not only operated the saloon and grocery but was also a major wholesale distributor of liquor.

In 1908, this lucrative business came to an end when the Mississippi Legislature voted on a state-wide prohibition that would take effect in 1909.

The Vicksburg Herald reported in December 1909 that “flutter already started to vacate Vicksburg” by the “whiskey men.” The article stated that a number of the large dealers were “to get quarters in Delta, La., just across the river, which diminutive spot on the map it is learned, may be increased to quite a whiskey dealing village when 1909 rolls around.”

Brennan, the paper reported, had plans to move his business to Monroe. A later article reported that sales had been brisk prior to the New Year and that Brennan had sold 300 barrels of whiskey from September to December.

Shortly thereafter, 1528 housed Thomas A. Morley soft drinks and 1526 was leased by Kaleel Jabour Dry Goods. Jabour was in the building until about 1920 when R. J. Burnett Motor Company, Buick sales and service, moved in. Burnett was there as late as 1924, but by 1929, Singer Sewing Machine advertised there until the 1940s, when Peoples Furniture Store occupied the building in the 1950s and then The Fashion Shop in the 1960s.

The building was demolished in the early 1970s and an empty lot remains.

Frustrated by repeat offenders, the Board of Mayor and Aldermen is doubling down on property owners who have been granted... read more