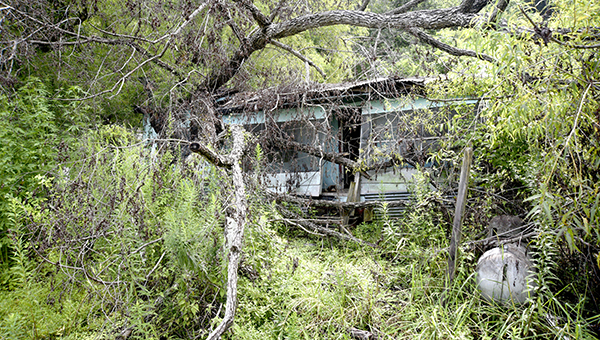 The property at 240 Stouts Spring Road is among a growing list of houses and property in Vicksburg under scrutiny by the city due to their poor condition. (Courtland Wells/The Vicksburg Post)

Frustrated by repeat offenders, the Board of Mayor and Aldermen is doubling down on property owners who have been granted extensions and still fail to clean their property.

Last week, the board changed its policy of granting multiple extensions to owners of overgrown and derelict property in violation of the city code, giving violators one 60-day extension to get their property clean.

The policy affects any property owner who has been cited for violations since 2017 when the present administration took office.

“If this administration has addressed an issue that’s out there already and we gave them the extension, there are no more extensions,” South Ward Alderman Alex Monsour said. “We’re not going to keep on giving extension after extension for you to get something fixed. From this point forward, my vote is going to be no more extensions.”

City ordinance requires property owners to keep their properties cut and clear of debris and their homes repaired. A violation results in a letter from the city ordering the property owner to clean the property or demolish the dilapidated home.

Under city ordinance and state law, the city can go in and cut and clean property or hire a private contractor to clean property determined to be a threat to public health and safety and bill the property owner for the work.

In the past, city officials have worked with property owners, giving them at times multiple extensions, or extra time, to clean their property after they have been notified by the city.

“We were becoming too lenient on the law and the consequences of that are other people who keep their property up were seeing their property values go down because of the dilapidated buildings in their neighborhood,” Mayor George Flaggs Jr. said. “We’re going to have to tighten the law.”

Presently, the city’s problems involve overgrown property that can also include dilapidated buildings and inoperable vehicles, and buildings that are so dilapidated they have to be demolished.

As of Aug 1, 2019, the most current date available, the city listed 115 homes scheduled for demolition.

“There are many more; each in my opinion is embarrassing to the city of Vicksburg when you have property that has to be demolished,” North Ward Alderman Michael Mayfield said.

In some cases, Mayfield said, the city is dealing with “heir property” — property that’s has been passed down through family members and been allowed to deteriorate.

“Then we have a number of properties that are burned, where the individuals are paid by the insurance company and then they walk off and leave it and we end up taking them down and of course you almost never get the money, almost never,” he said.

“The city will probably never see that money,” Mayfield said, adding the combination of liens and administrative fees attached to the abandoned properties for cleaning and demolition eventually double or triple a property’s value making it too expensive to purchase.

And the city is prohibited by law from waiving liens on property.

“We’ve given people plenty of time and there’s no progress and you can’t continue to give people more time and more time and they do nothing to the property,” Monsour said. “We are trying to improve the city and keep property values high, and the only way you can do that is to keep the neighborhoods right.”

The Vicksburg community did not let a few raindrops stand in the way of celebrating the retirement of two beloved... read more