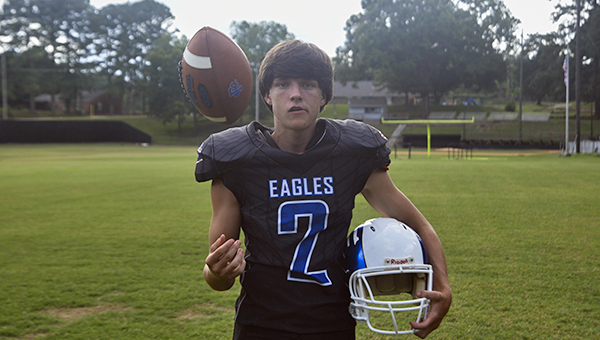 Playmakers 2020: PCA senior Braden Kapp is everywhere on the field

Last season, as injuries mounted and the number of available players dwindled, Braden Kapp found himself in an unenviable position.

He was asked to take off his No. 2 jersey, swap it out for one with a lineman’s number, and move from wide receiver to left guard. It would be a difficult adjustment for any player, let alone one who weighs 150 pounds. For Kapp, it was just another week.

In his first three varsity seasons at Porter’s Chapel Academy, Kapp has seen playing time at nearly a dozen different positions — including both the offensive and defensive lines. A passion for football drives the senior to take on whatever role he’s asked to play, and do it as well as he can.

“It’s football. I love the sport. It doesn’t matter if I’m playing cornerback or defensive tackle, if I’m in the game I’m having a blast. It’s fun,” Kapp said. “Especially my last season, if they ask me to play anything I’ll say ‘Yes, sir’ with a smile on my face. It’s the last season I’ll probably ever step on a football field and strap up with the boys.”

Porter’s Chapel head coach Blake Purvis said he plans to ask Kapp to play almost everything this season. Kapp will primarily play wide receiver and outside linebacker on offense, but will also get reps at tailback, fullback, quarterback and defensive end.

Kapp, a senior, said he’s also been working at free safety, dog safety — a hybrid safety and linebacker position — and cornerback in the preseason.

In the first three games of the regular season, Kapp has had several big runs on offense to help PCA get in position to score points.

“I would not be shocked for Braden to register stats at quarterback, fullback, running back and receiver, offensively. And then defensively as an outside linebacker-strong safety type guy. He’s going to be a very versatile player for us,” Purvis said. “He’s got the athleticism and the physical mentality to play all those roles for us. He’s stepped up into a leadership role. He’s brought more energy and been a better leader for us this year than what he was as a junior.”

In 2019, Kapp played at defensive end as well, and even filled in for a time at defensive tackle and quarterback. He finished with 49 total tackles, four for loss, and one fumble recovery on defense.

He said some of those moves were necessary because of a lack of depth and experience on PCA’s roster. More than half of the varsity players last season were eighth- and ninth-graders, and some of the upperclassmen got hurt as the season went on. His time at quarterback, for example, came when starter Luke Yocum was injured in a game against CHEF.

Kapp said he has always been moved around the field, so when coaches turned him into a utility player capable of plugging any hole in the lineup it was a natural transition.

“I’ve played a lot of positions my whole life. I’ve been in and out of different positions based on my size. I’ve played a little defensive tackle. I’m quick,” Kapp said. “We had a lot of players go down last year with injuries and we were short on guys. We had to put some ninth-graders into positions where they wouldn’t get hurt, so they put me in the more difficult position.”

On one level, Kapp said, playing so many different positions is like backyard football where players are constantly moving around the field. On the other, it requires a lot of work.

During practice, Kapp needs to learn different techniques and skills that allow him to hold his own, occasionally against bigger or faster opponents. He must learn the ins and outs of every play and know every player’s assignments.

Although he’s one of PCA’s most valuable players heading into the season based solely on how many roles he can play, Kapp shrugged it off. On a team with less than 30 varsity players, after all, most of them will play both offense and defense. Some will even play out of position if injuries or a situation dictates it.

“I think anybody on this team could do it just as well as I can, because we’ve come out here with better attitudes wanting to change the record and culture around,” he said. “I think everybody has a better attitude on their head and the chip’s off their shoulders. They’re just ready to play ball.”

Few, though, will move around as often or excel in the role as Kapp will. His combination of selflessness and leadership will be as valuable as his skill as PCA tries to earn its first winning season since 2008.

“Just doing what’s best for the team. Wherever they need anybody, not just me. We don’t have that many guys that are juniors or seniors. We just have to go with what we have,” Kapp said. “I’m a team player. I say ‘Yes, sir’ and give it my best.”