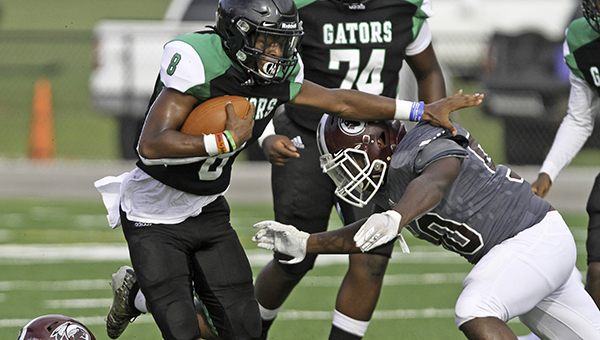 Vicksburg High quarterback Laurence Sullivan (8) carries the football in a scrimmage against Hazlehurst last week. Vicksburg will open the 2020 season this Friday at Warren Central in the Red Carpet Bowl. (Paul Ingram/For The Vicksburg Post)

Last week’s scrimmage game against Hazlehurst was supposed to be the world premiere of Todd McDaniel’s Vicksburg Gators and their old school Wing-T offense.
It turned out to be more of a trailer.

Because of a running clock and some early offensive missteps, the Gators only ran 10 offensive plays spread across three series. The scrimmage was over in less than 30 minutes.

It wasn’t exactly the amplified practice session they were hoping for heading into this week’s regular-season opener against archrival Warren Central.

“It took us longer to get on the bus and go over there than it did to play,” McDaniel said, no small amount of frustration in his voice.

The Gators fumbled on their first play against Hazlehurst, went three-and-out on the second series, and then pieced together a seven-play drive that ended on downs at the Hazlehurst 20-yard line. In all, the Gators finished with 51 yards of offense, nearly half of it on a 24-yard burst by fullback Channing Adams.

The final possession showed a glimpse of what their offense is capable of, but the overall performance also showed that the Gators will be built for a slow and steady approach that might take time to be effective. The format of the scrimmage, with a 12-minute running clock for two quarters, did not give them that kind of time.

“I didn’t get as many reps as I wanted. I only got 13 plays from scrimmage. I saw some holes there. The kids have to get used to the offense and finding those holes,” McDaniel said. “We didn’t have a chance to get in a rhythm. We fumbled on our first play, and when we got the ball back it was down to seven minutes out of a running 12 minutes. Then we went three-and-out and it was down to four minutes.”

In addition to working out the kinks on a new offense, Vicksburg was trying to break in a replacement quarterback. Starter Sha’Kori Regan injured his hand in practice last week. He did not play in the scrimmage and is expected to miss at least the opener against Warren Central as well.

Laurence Sullivan, normally a receiver and defensive back, filled in for Regan and ran for 10 yards on five carries in the scrimmage. Now he’ll get his first varsity start as a quarterback in one of the biggest games of the season.

“I’m just trying to do whatever helps us to win this year. It’s my senior year. I feel like I need to be a leader on the team and help our team win,” Sullivan said. “I’m not nervous because I’ve been starting since 10th grade. It’s just natural now. I’ve just got to play.”

The debut and performance of the Wing-T offense overshadowed a pretty good performance by Vicksburg’s defense in the scrimmage. The Gators allowed three plays of 15 yards or more, including a 23-yard touchdown pass, but also had one sack, one turnover, and forced a three-and-out on Hazlehurst’s opening possession.

The defense also scored Vicksburg’s only touchdown, on a 95-yard interception return by linebacker Tommy Curtis.

“I read the quarterback and he was eyeing down the receiver the whole time. I read it, made the play, broke on the ball, and gone. Six,” Curtis said with a smile. “I was just waiting on the moment and when it happened it was time to use the speed.”

Now the Gators turn their attention toward stopping Warren Central. They’ve lost eight in a row in the series, with the last victory coming in 2011. In six of those losses, they’ve scored seven points or less.

“I feel like this year is going to be different because we’ve got pressure up front, we’re very confident in our coach, and we’ve got most of our defense returning. We’ve got seven seniors on defense. We feel like we can have a good season,” Curtis said.

The 2020 edition of the River City Classic will have a unique and surreal feel to it. In addition to being the 40th time Vicksburg and Warren Central have played, it will mark the first time they have faced each other in the Red Carpet Bowl. This game was designated as the Red Carpet Bowl after the Mississippi High School Activities Association delayed the season by two weeks and the original doubleheader was canceled.

It will also mark the first “real” game of the COVID-19 era. Only about 150 fans will be in the stands after the Vicksburg Warren School District Board of Trustees voted to limit attendance in compliance with an executive order by Gov. Tate Reeves. Ticket sales were limited to two for each senior football player, band member, cheerleader and dance team member.

McDaniel said he usually tunes out the crowd during games, but did not downplay the importance of the game.

Vicksburg High linebacker Tommy Curtis returned an interception 95 yards for a touchdown in a preseason scrimmage against Hazlehurst on... read more