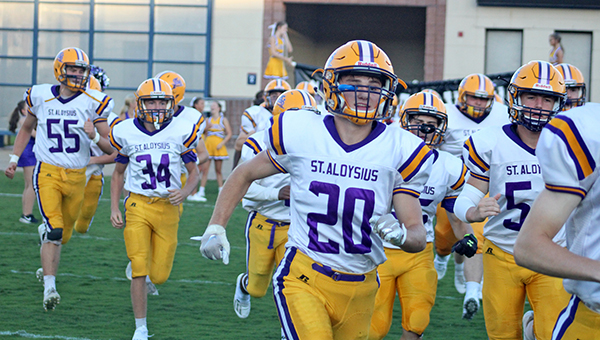 Despite losing their first two games, coach Stacy Sizemore believes the St. Aloysius Flashes don’t have any problems that time and a couple of favorable matchups can’t solve.
Unfortunately, both seem to be in short supply.

The Flashes (0-2) will head to Raymond on Friday night for their MAIS District 3-5A opener against Central Hinds (0-2). Although it’s a matchup of winless teams that seems a better matchup — on paper at least — than their first two games, it will also be another step in a difficult growing process, Sizemore said.

St. Al only has six seniors on its roster, many of whom have not played football at the varsity level before this season.

“I feel pretty good about where we’re at. We’re not looking too far ahead, just looking at today,” Sizemore said. “We’re cleaning up mistakes and the kids are playing hard. I’ve been saying as long as they do that, I’m OK with it. We just have to get into an opportunity where we can match up with someone. We haven’t matched up with anyone the first two weeks.”

Indeed, St. Al’s first two games have been against MAIS Class 5A championship contender Hartfield Academy, and a Greenville Christian team that received a massive infusion of talent between Week 1 and Week 2.

Greenville Christian had approximately 20 new players on its roster for its 18-3 win over St. Al, all transfers from various public schools in the Delta that elected not to play football this season.

St. Al, meanwhile, is plugging along with an inexperienced team that Sizemore said has simply been overmatched so far.

“We only have about six seniors, and most of the team is sophomores and juniors and a couple of ninth-graders — and most of the juniors didn’t play last year,” Sizemore said. “Our two offensive tackles have only had two games of varsity experience and our quarterback hasn’t played football since eighth grade.”

The inexperience has manifested itself in a lack of offensive punch. St. Al has less than 200 yards of total offense through two games, and has yet to score a touchdown. Its only points came on a 42-yard field goal by Reed Bourne in the third quarter against Greenville Christian.

“We have to put our kids in a position to have success. When you’re young and inexperienced, it’s going to take longer than usual,” Sizemore said. “We’re going to try to focus on one thing. In our position, we have to be able to run the football and manufacture some yards.”

Sizemore added that there was a marked improvement from Week 1, when the Flashes trailed 36-0 at halftime against Hartfield, to last week’s contest that was relatively close throughout. Defensive back Brennan Williams had two interceptions against Greenville Christian, but some ill-timed penalties and turnovers short-circuited potential scoring drives.

“The score doesn’t tell the whole story. We are heading in the right direction. We made some strides this last week and competed,” Sizemore said. “We had some opportunities. We had a couple of picks and returned it to about the 25-yard line, and had a block in the back away from the play. Then we had a late hit out of bounds. We have to clean those things up.”

Every storm eventually breaks, and Sizemore said he feels like that day is coming for the Flashes. A win, whether it comes this week against Central Hinds or not, will go a long way toward turning things around on a bigger scale, he said.

“It helps tremendously. It helps the kids with their confidence level,” Sizemore said. “When you haven’t won in a couple of games they get down on themselves. It’s our job as coaches to not allow that to happen. When you have a win under your belt, you feel better.”

Playmakers 2020: PCA senior Braden Kapp is everywhere on the field

Last season, as injuries mounted and the number of available players dwindled, Braden Kapp found himself in an unenviable position.... read more