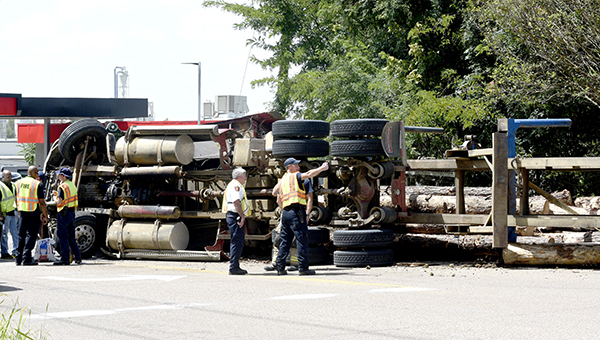 Vicksburg Police, Fire and EMS respond to a log truck that overturned at the intersection of Haining Road and North Washington Street just after noon Thursday. (Courtland Wells/The Vicksburg Post)

The wreck occurred about 12:02 p.m. Vicksburg police officer Russell Dorsey said Ron Crawford of Canton, the driver told officers he was southbound on North Washington approaching Haining Road when a car pulled out in front of him. He swerved to avoid the car and overturned, losing his load.

Crawford was taken by ambulance to Merit Health River Region Medical Center where he was treated for minor injuries.

Vicksburg Fire Department Battalion One Chief Tim Love and the fire department’s Engine 9, one ambulance and a rescue truck responded to the call.

First Baptist’s driveway devotionals about more than a Bible study

As the sun begins to set across Vicksburg, members of First Baptist Church gather at various locations across the city... read more