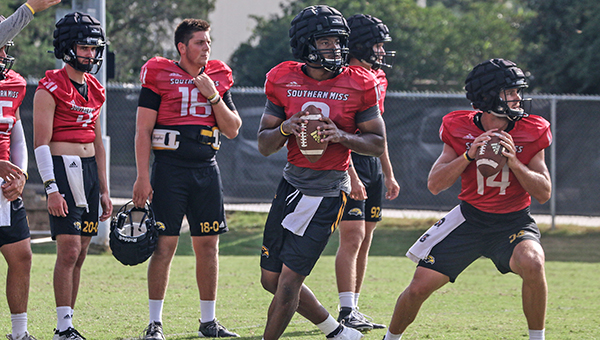 DALLAS (AP) — Conference USA has schools stretching over 10 states, from Texas eastward and then toward the north. The 14-team league is within the footprint of the SEC, Big 12 and ACC.

Like those Power Five leagues that play in the same region, C-USA is planning to be on the field this fall. They also will get on the field first.

Two games are scheduled for Thursday night to begin the season — South Alabama at Southern Miss and Central Arkansas at UAB. Four more games follow on Saturday, as C-USA begins three weeks before the Power 5 leagues.

“It’s been an interesting spring, an interesting summer, and I think everybody is ready to get the season kicked off and give us some type of normalcy,” said Southern Miss head coach Jay Hopson, a Vicksburg native. “You’ll have pretty much all eyes on you, and I think that’s an outstanding opportunity for our university and our program. It’s just good to get the 2020 college football season started.”

Still, things got shaken up even after C-USA decided to keep its original eight-game league schedule intact, and allow schools to play up to four non-conference games as normal.

Old Dominion decided last month to not play fall sports amid COVID-19, costing a conference game for every C-USA team in the East Division and two in the West. There were also many games lost with the remaining Power Five conferences (Big Ten, Pac-12) and two Group of Five leagues (MAC, Mountain West) that opted to shelve football this fall, as well as against Southeastern Conference teams that are only playing opponents in their own league.

UAB’s season-opening home game Thursday night will be played only about two weeks after being scheduled.

Central Arkansas, an FCS team playing a non-conference schedule even after the Southland Conference postponed all its league games this fall, beat Austin Peay 24-17 last weekend in the first college game played in this pandemic-altered season.

“With everything going on, you never really know if it could be your last game, or if you could miss a few games, especially with COVID-19 and everything else going on in the world,” UAB senior left tackle Colby Ragland said. “It is easy to lose focus of being on the football team and the goal of going out there and winning a championship. Our coaches do a great job of letting us know what they know about what is going on.”

UAB was supposed to open against New Mexico State, which postponed it season. The Blazers secured the Central Arkansas matchup with stipulations of paying for the hotel and pregame virus testing for the visitors.

“It was what it took to get the deal done,” UAB coach Bill Clark said. “We said we were going to do what it takes to get a game.”

Rice is playing only its eight conference games, and won’t open until Oct. 3. Florida International also has only an eight-game schedule set, without Old Dominion but with a non-conference game at Liberty.

Only Southern Miss, UTSA and UTEP have filled out full 12-game schedules.

Southern Miss opens against South Alabama, a seemingly natural regional rival that has never developed. This will be the first-ever meeting between the teams. They’ll play again in the 2021 season opener in Mobile.

“Any time you’re playing teams in this region, it creates interest. It’s a game fans want to come to. From South Alabama, we’ve played Mississippi State and (Louisiana-Monroe). We have Tulane coming up this year,” Hopson said. “We try to play as many games in this region as we can. It’s good for the game and good for football in this area. We’re excited for the series with South Alabama.”

The opener will have a muted tone in the COVID-19 era. Attendance will be limited to 25 percent of the capacity of M.M. Roberts Stadium, roughly 9,000 fans. No tailgating is permitted for those that do attend, and it was unclear whether there would be bands or cheerleaders in the stadium.

Virus outbreak at Central Hinds leads to postponement of game vs. St. Al

St. Aloysius’ football game against Central Hinds, scheduled for Friday night, has been postponed because of a COVID-19 outbreak among... read more