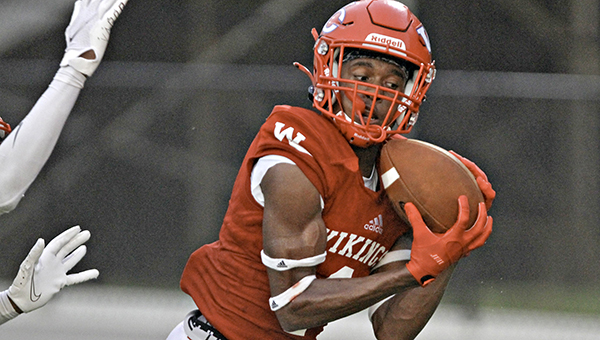 Warren Central’s Jaylon Chriss hauls in a pass during a scrimmage against Holmes County Central. (Paul Ingram/For The Vicksburg Post)

Warren Central vs. Vicksburg 2020 is a new spin on an old favorite

Warren Central has played in the Red Carpet Bowl 27 times in its 58-year history. It’s safe to say none of them have ever been like this.

The Vikings will face archrival Vicksburg High on Friday night in Viking Stadium in a game that has more designations and nicknames than teams. There will be more players and coaches on the field than fans in the stands, and hundreds more that would normally fill Highway 27 with parked cars will instead burn up Warren County’s Wi-Fi networks by watching the game on their computers.

It’ll bring a surreal feeling to the 2020 season opener, but that hardly matters to a couple of teams that have been eager to play following a summer of uncertainty.

“As a kid, you want to play in front of those big crowds. You relish that. If you’re a true competitor, when the crowds are at their biggest and the lights are at their brightest, a lot of people rise to that occasion,” Warren Central coach Josh Morgan said. “But I do think, because it’s the first game, it’s Vicksburg and the Red Carpet Bowl, it’ll trump all of that. It’ll be a really good football game.”

Because of fears of spreading the COVID-19 virus through a large crowd, the Vicksburg Warren School District Board of Trustees voted to limit attendance to about 150 people. Two tickets each were made available for every senior football player, band member, cheerleader and dance team member.

The game will be live streamed on the VWSD’s Facebook and YouTube pages for those unable to attend.

This will also be the first time in 40 meetings that Warren Central and Vicksburg have played in the Red Carpet Bowl, as well as the first time since 1991 that it is a single game instead of a doubleheader or tripleheader. Those changes came about because of COVID-19 as well, following the MHSAA’s decision to delay the start of the season by two weeks.

All of the hype that comes with whatever you want to call the game — the River City Classic, the River City Rumble, the Red Carpet Bowl or just plain Vicksburg vs. Warren Central — will add another layer of intensity to the game, Morgan said.

“It’s your typical Week 1 stuff. We’re very excited to play. With it being Vicksburg and the Red Carpet Bowl, it just makes the anticipation for Week 1 that much more exciting. There’s a lot of buzz around this week, for sure. It’s all accumulated into one big week,” Morgan said. “It’ll be weird, for sure. It’ll be different. We have to do a good job as coaches to make sure that we can control what we can control, and make sure we’re focused on the task at hand. We’ve got to make sure we’re on point and that we can handle that.”

Another difference Warren Central is hoping for is in the outcome, compared to its preseason scrimmage last week. The Vikings lost 13-0 to Holmes County Central in a two-quarter varsity game.

The Vikings gave up one touchdown on defense at the end of a long scoring drive, and another on offense on a 72-yard interception return. Their own offense scored during the junior varsity portion of the scrimmage, but was shut out in the varsity game.

Morgan said it was the mixed bag of results most teams expect from a scrimmage, which gives the Vikings an idea of what it needs to work on when the games start counting for real.

“We didn’t play very good in certain aspects of the game. We did some good things, and then along with it did some bad things,” Morgan said. “We had a costly turnover that went back for a touchdown that was really the swinger of the half. We were frustrated we couldn’t get the ball in the end zone and we couldn’t get off the field defensively. But those are some things we can clean up and get better at.”

The Vikings will face another new challenge when they play Vicksburg. The Gators have a new coach, Todd McDaniel, who is installing a new offense, the Wing-T.

Vicksburg only got to run about a dozen plays against Hazlehurst in its two-quarter scrimmage last week, which did not give Warren Central’s coaches much to scout. The Vikings did play two Wing-T teams last season, however, as Clinton and Germantown both use the offense. Morgan said having some familiarity with such a unique attack is beneficial.

“We hadn’t seen them in a long time, and then Clinton has been doing it the last year or two and Germantown runs a version of it. So we’ve had a little bit of experience with it,” Morgan said. “You have to play assignment football and have a plan, because it’s definitely unique.”

As with most teams this time of year, Morgan said the bigger concerns are with his own team and what they’re doing well or not doing well. The scrimmage helped in that regard, and will allow the Vikings to dial in on their strengths early in the season.

“I’m very glad that we got to play and do the typical stuff you’d expect,” Morgan said. “We played everybody. We know what our identity wants to be, but sometimes we still have to cater it to our personnel, find out what we can do good and try to be really good at it. We got a lot of good stuff out of it moving forward.”

DALLAS (AP) — Conference USA has schools stretching over 10 states, from Texas eastward and then toward the north. The... read more