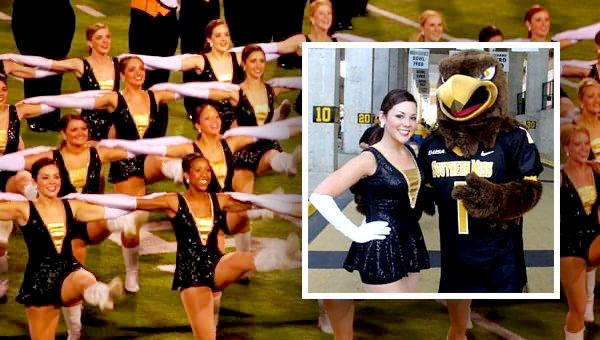 It had been the tradition of the University of Southern Mississippi’s precision dance team that attracted a former Vicksburg resident to try out for the team.

For three years, Rachel Ross was a member of the Dixie Darlings, which was one of the first precision dance teams in America.

Created in 1954 to perform with the Southern Miss band, the group became famous by performing at nationally televised football games and parades.

Initially called the Dixie Maids during the first week of the group’s practice, founder Dr. Raymond Mannoni, the school’s band director at the time, decided he didn’t like the name. After several suggestions, Dixie Darlings was chosen.

Now, more than six decades later, the group will take on another name according to an announcement made by the university.

Critics have said the nickname Dixie, which was a reference to the former Confederacy, is racially insensitive.

Ross, who was a member of the team from 2007 through 2009, and is now a theme park performer at both Disney World and Universal Studios in Orlando, Fla., said she agrees. A name change for the dance group is a positive move.

“I think it is really cool the university is opening a conversation and hearing viewpoints that have not been thought of before,” she said. “I learned the tradition of the Dixie Darlings when I became a member, and the longstanding tradition was one of the things that attracted me to the team. So it was really cool to be part of that legacy, however, I think it is also important to hear what our fellow team members are saying and what the community is saying, and I think it is important to normalize changing your opinions when presented with new information.”

Before the name of the dance group is changed, the school plans to hire a diversity officer to aid with the decision.

The Dixie Darlings, known for their kick line, perform during pre-game shows, halftime shows, at pep rallies and on the sidelines during the football season. The group is now comprised of 40 members.

In addition to the name change for the Dixie Darlings, the song the dancers emerge onto the field with, “Are You From Dixie,” will be changed.

A mother’s prayer for her daughters is continually answered

Mary Pendleton is proud of her daughters. As a single mom, she knows the challenges her family has had to... read more