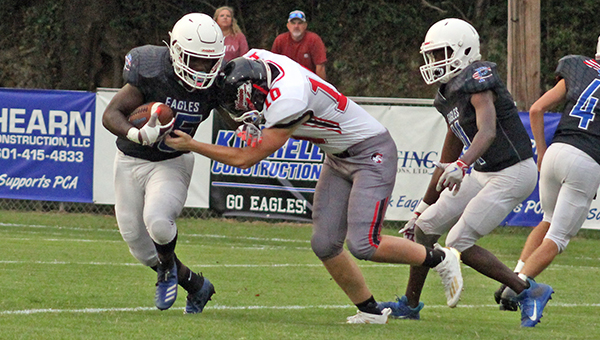 PCA goes for a hat trick against Claiborne

After years of struggling, the Porter’s Chapel Academy Eagles are dealing with a welcome challenge this week — how to handle success.

PCA has won back-to-back games for the first time since 2017, and can make it three in a row by beating Claiborne Academy at home on Friday night. The last time PCA had a three-game winning streak was when it won its last two games in 2013 and the opener in 2014. It has not won three in a row in the same season since 2011.

PCA coach Blake Purvis said the Eagles are trying to balance success with the knowledge that there is still a lot of work to do before they can turn it into a good season.

“We obviously have had a little success these last two weeks. We’re trying to keep the guys grounded and humble, and let them know there is still work to do,” Purvis said. “Momentum is up a little bit. Things are starting to improve. We’re still a team that has to learn to win and deal with success. But the guys are buying into the process.”

PCA’s two wins came against Newton Academy (10-0) and Deer Creek (43-20), in two different types of games. The win over Newton was a defensive masterpiece in which the Eagles had less than 200 yards of offense but earned their first shutout in two years. Against Deer Creek, they had 359 rushing yards and scored more than 40 points for the first time since the 2017 season opener.

Running backs Tyler Washington and Brayson Morson each had more than 100 rushing yards against Deer Creek. Quarterback Jace Riggs finished with 67 and two touchdowns, while receiver Braden Kapp added 56 yards on a reverse early in the game.

Having multiple threats in the running game was a nice asset to have, Purvis said, especially during a two-game stretch against opponents from MAIS’ eight-man division.

“It definitely makes us much harder to defend. You have to account for more players on the field. We added that quarterback element last week,” Purvis said. “It also allows us to mix up our production and put it in the hands of guys with fresh legs. It makes their carries more productive when they’re a little bit fresher.”

“Our offensive line and defensive line are both playing well. They’re winning up front for us, which is helping us have success,” he said.

Claiborne Academy (1-1) is the second of two eight-man opponents on PCA’s schedule. The matchups were necessitated by an uneven number of teams in the MAIS’ lower classifications for the 2019-20 realignment cycle. PCA (2-1) will return to 11-man football next week against CHEF, a home school team from Baton Rouge.

Purvis said the two-week switch to eight-man and back again was an awkward mid-season adjustment, but one the Eagles seem to be taking in stride.

“They’re more comfortable in Week 2 of their reps,” Purvis said. “We were able to add a couple of things this week. That said, we’re not a seasoned eight-man team and we won’t be, because that’s not who we are.”