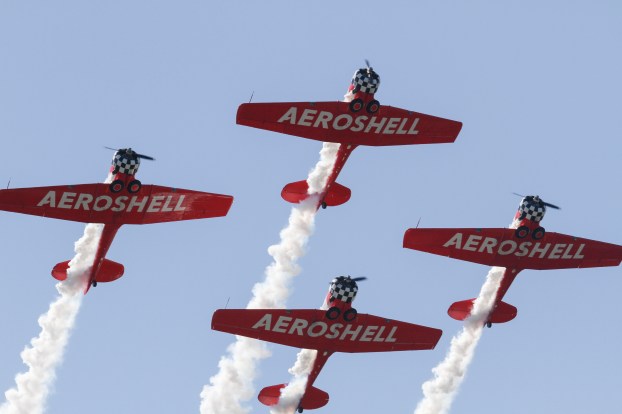 Rods and Warbirds will be the main attraction at the Southern Heritage Air Foundation’s “Warbirds, Wings & Wheels” show Oct. 17 at the Vicksburg-Tallulah Regional Airport in Mound, La.

The show is being held in place of the foundation’s biennial “Best Little Air Show in the World,” which has been postponed because of concerns about the COVID-19 virus.

Foundation president Patty Mekus said financial concerns raised by the potential effects of the virus forced the decision on the air show.

“If we had to, for some unforeseen reason shut it all down, even three days before, we’ve got (to pay) the performers, the air boss (to coordinate aerial performances), sound system and insurance — all those things,” she said.

“We would be out pretty close to $100,000 and that would probably make us have to close our doors.”

The idea behind Warbirds, Wings & Wheels, Mekus said, was to have a family-friendly event that had the potential to raise money for the museum and the Warrior Bonfire Program.

Aeroshell, Mekus said, is donating its time for the show.

One of the featured aircraft on display at the show is the Commemorative Air Force’s C-47 transport “That’s All Brother” that led the airborne assault on Normandy for D-Day. The plane will be open for tours by the public and people will be able to fly in the plane for a fee.

The show is being held in conjunction with a formation clinic that begins Oct. 15 and runs through that Saturday, where pilots work to earn their formation card that allows them to be able to fly in aerobatic formations.

“In between their formation flying, some or them may practice their aerobatics,” Mekus said. “It’s definitely not an air show, but there will be a lot of flying going on.”

Held every two years, the foundation’s Best Little Air Show in the World has drawn thousands of spectators from Louisiana and Mississippi to the Vicksburg-Tallulah Regional Airport to look at vintage aircraft and watch aerobatics.

Mekus said one of the problems facing this year’s show was the lack of sponsors who were able to help the foundation because of financial problems caused by the virus.

It had been the tradition of the University of Southern Mississippi’s precision dance team that attracted a former Vicksburg resident... read more