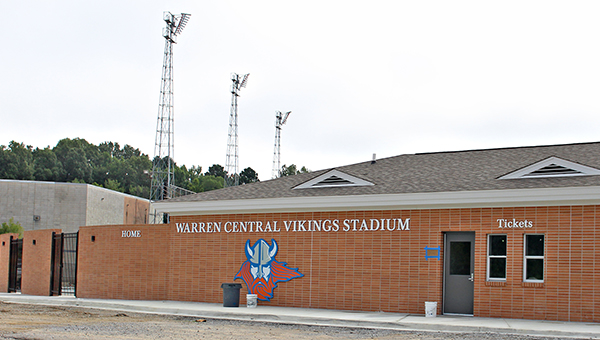 The new entrance and ticket booth at Warren Central’s Viking Stadium. The Vicksburg Warren School District has announced it will not issue paper tickets for football and volleyball games this season, and will instead use a digital ticketing system. (Ernest Bowker/The Vicksburg Post)

Fans of Vicksburg High and Warren Central will now need to go online before they go to the game.

The Vicksburg Warren School District will no longer sell paper tickets ahead of time or at the gate, and instead will use a digital-only ticketing system. Athletic director Preston Nailor said the system will be in place at least through the fall sports season, and the plan is to eventually make it permanent.

The school district implemented the digital ticketing system in 2018, but is expanding its use to help prevent the spread of COVID-19. A side benefit is that it allows the district to better manage the number of tickets sold. Under Mississippi’s current COVID-19 restrictions, attendance is limited to 25 percent of a venue’s capacity.

“A lot more schools are using it because it cuts down on the hand-to-hand transmission of money and tickets. We can scan and validate tickets without anything ever changing hands,” Nailor said. “We are not going to take printed paper tickets. We will scan their device with another mobile device. We’re going to test that system (Tuesday and Wednesday) and have it ready for Friday.”

The digital system runs through the web site GoFan.co, which is now used by many Mississippi high schools. Fans must purchase tickets in advance from the web site using a credit or debit card, and will then receive an email containing a QR code that is scanned by workers at the gate.

Tickets will go on sale Sunday at noon the week of a game — it will be in use for both football and volleyball this fall — and continue either until the game begins or all available tickets are sold. The process only takes a few minutes.

Approximately 1,600 tickets will be available for each Vicksburg and Warren Central football game, all of which will be played at WC’s Viking Stadium.

A total of 150 tickets will be available for each Vicksburg High volleyball match, and 81 for Warren Central’s, because of the different sizes of their gyms. Both volleyball teams are playing at their respective junior highs because of construction at the high schools.

In theory, the purchasing process is fast enough that fans could still buy their tickets while walking up to the gate. They just would have to show the person working the gate their cellphone instead of a paper ticket.

Nailor said it was wise not to wait, however. Nearly 100 tickets for this Friday’s Brandon at Warren Central football game were sold within five minutes, and by noon on Tuesday about half of the available tickets were gone.

“The cutoff is when all of the tickets are sold. If you wait until the last minute, you might not get a ticket,” Nailor said. “By Friday, with both schools selling tickets, we might be close to a sellout for some games.”

Nailor acknowledged some people will have trouble adjusting to the new system, but recent advances in technology and widespread cellphone use have made the transition to digital ticketing smoother. Many college athletic departments and pro teams have implemented similar systems in recent years, which has also helped.

“It’s not just people looking at us and saying, ‘Why are they trying something new?’ It’s a statewide initiative,” Nailor said. “It’s going to be a transition for some, but it’s easier for others, and so far it’s been easier than I thought it would be.”

When he was hired as Southern Miss’ head coach four years ago, Jay Hopson called it “a dream job.” The... read more