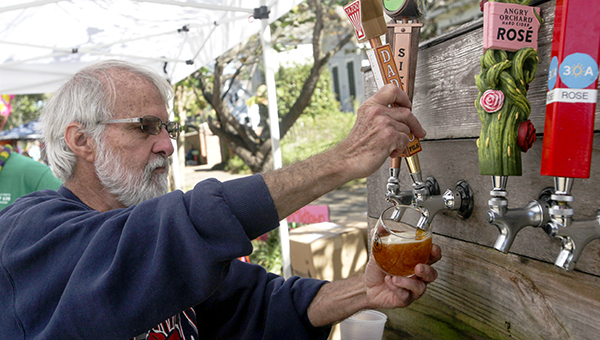 John Martin, with Martin's at Midtown, pours a beer for attendees during the 2018 Porchfest on Drummond Street. Organizers announced Thursday the 2020 event has been postponed due to concerns surrounding the COVID-19 virus. (Courtland Wells/The Vicksburg Post)

Porchfest, which for the past two years has drawn area residents to the Fostoria neighborhood on Drummond Street to listen to music and look at arts and crafts, has been postponed because of the COVID-19 virus.

“We were putting off the decision as long as we could, hoping the mask mandate and the (restrictions on) large gatherings would come back around but we decided this week to regretfully postpone this fall,” organizer Elizabeth Nelson said. “If things get back to normal maybe we can put something together for the spring and the fall as the fallback next year.”

Nelson said planners were hoping to put together an event in early to mid-November “but it seems like this pandemic is going to be with us for a while, unfortunately.”

Begun in 2018, Porchfest is an all-volunteer community focused acoustic music festival where front porches become stages for the day and musicians of all different acoustic genres perform on the front porches in the neighborhood.

Besides the music, local restaurants set up food booths and local artists displayed arts and crafts. A large section of Drummond Street was blocked off during the event to open the street to pedestrian traffic.

“We were getting a lot of questions and with the mask mandate and the large gatherings, we just felt the right thing to do was postpone and when we can do this safely for everyone we’ll plan on doing it right,” Nelson said.