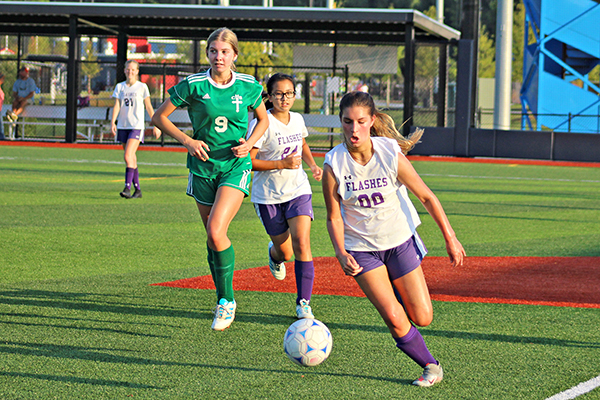 St. Al takes care of Cathedral on the pitch

This has not been an easy soccer season for St. Aloysius. Three district losses will have it fighting for their playoff lives over the next couple of weeks.

Luckily, the Lady Flashes came across something on Thursday that always seems to leave them in a better mood — a game against Catholic school rival Cathedral.

Bree Butler scored two goals, and Elizabeth Theriot had a goal and four assists as St. Al routed Cathedral 7-0 at Sports Force Parks on the Mississippi. It was only the second win in six games this season for St. Al, and both have been against Cathedral. St. Al has scored 12 goals in those two games.

“They needed this,” St. Al coach Gio Baldizon said. “We’ve been working hard, and practicing four times a week, and during practice we shoot at the goals and they go in there. Here, the last two or three games we laid an egg against Pillow, Bayou and Washington. We shut them out after they scored, but we could never get in. Today, it came in.

Baldizon was hopeful the big win on Thursday will give the Lady Flashes a bounce heading into the season’s final stretch. They need to win their last two district games, against Washington School on Sept. 21 and Bayou Academy on Sept. 24, to have any chance at reaching the playoffs.
St. Al’s next game is Monday at 5 p.m., home at Balzli Field against Central Hinds.

“Last week against Washington and East Rankin, we had opportunities just like this. It’s just that they were not going in the goal. I told them it’s coming. This proves it tonight. This is helpful to build on,” Baldizon said. “If we can carry this momentum, you never know, we might get in the playoffs.”

Recent frustration gave way to plenty of goal celebrations on Thursday, as the scoring came fast, furious and early for St. Al.

Butler and Madelyn Roesch each found the net to put the Lady Flashes ahead 2-0 less than 20 minutes into the game. Cati Mathews, Butler and Theriot each added goals before halftime to turn it into a 5-0 blowout.

The goals came slower in the second half — Cathedral keeper Meredith Lesley stopped a half-dozen shots and her defense played a bit better in front of her — but St. Al still managed to put two more into the net just before the final whistle.

Freshman Grace Windham carved a shot past Lesley from a tough angle on the right side of the field at the 78-minute mark, and in the 80th minute Madi Mathews scored to make it 7-0.

“Overall, my team was not in sync today. They just were not feeling it,” Cathedral coach Dennis Hogue said. “St. Al moved the ball really well and had some good shots. But all things considered, as many shots were fired I was super pleased with my keeper.”

The evolution of Vicksburg High’s football game against Biloxi might be a more fascinating tale than anything that happens on... read more