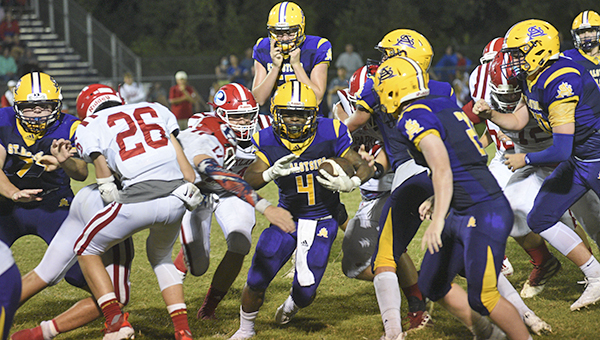 Parklane too much for St. Al to handle

The bigger victories, they hope, will come in time for the St. Aloysius Flashes. For at least this week, however, they’ll have to be content with the small, individual victories they can find in defeat.

Jordan Anthony caught a touchdown pass and returned a punt for a touchdown for the Pioneers (1-1), while Jekorvian Long and Jeremiah Dillon also scored touchdowns.

It was not a great night for St. Al, but coach Stacy Sizemore said he was proud of his players for hanging in against a tough opponent.

“I was proud of our kids. We’re down 32 points and we were still playing hard and trying,” said Sizemore, whose roster only has a handful of experienced players on it. “We’re moving in the right direction. It’s just that rebuilding process. When you’ve got guys that have never played before, it’s going to be a work in progress.”

St. Al actually outgained Parklane on the ground, 178-169, and had 16 first downs to Parklane’s nine. A handful of big plays in the first half swung the game in Parklane’s favor, however, including a 60-yard punt return touchdown by Anthony in the second quarter. Four of Parklane’s five touchdowns covered 19 yards or more.

Parklane built a 32-0 lead by halftime and cleared its bench in the last two quarters. That allowed St. Al (2-2) to find some success and build some positive momentum heading into next week’s home game against Riverfield.

The Flashes finished with 178 rushing yards — they only attempted four passes — and averaged 9.3 yards per carry. Padre Gray led the team with 70 rushing yards, Brennan Williams had 61, and Trace Daily 35 on a combined 17 carries. The Flashes only committed one turnover.

Defensively, Daily had six tackles and Chase Tucker had a team-high seven.

Vicksburg High took a long trip to the Coast Friday night, and what felt like an even longer one back... read more