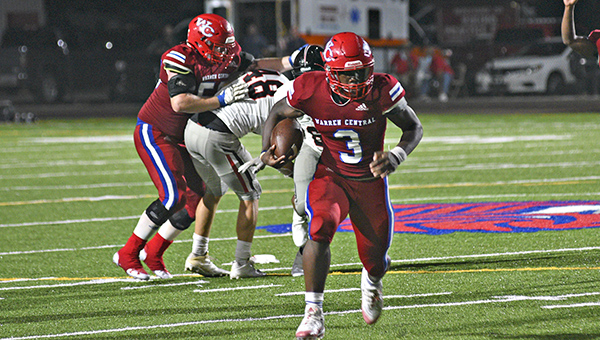 Warren Central’s Timothy Thompson Jr. (3) runs against Brandon on Friday. Thompson only had 21 rushing yards, but scored a touchdown in the fourth quarter to help the Vikings to a 23-3 victory. (Courtland Wells/The Vicksburg Post)

One of the main goals for Warren Central’s defense this season is to re-establish itself as one of the best in Mississippi after taking a step backward in 2019.

There are plenty of challenges ahead, but a few more performances like the one turned in Friday will go a long way toward beefing the unit’s reputation.

Senior defensive end Taylen Smith returned an interception for a touchdown, and Warren Central held Brandon to four first downs and 80 yards of total offense in a dominant 23-3 victory.

Warren Central (2-0) has yet to give up a touchdown in eight quarters so far this season.

“We knew coming into the game what they wanted to do, so all we had to do was listen to our coach and just do it. We did it tonight and it paid off,” said Smith, who also had one sack to go along with his first career interception.

The Vikings’ defense forced three-and-outs on Brandon’s first three possessions, and then got a score of its own the fourth time the Bulldogs (0-2) got the ball. 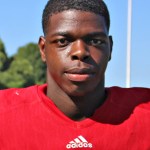 On third down, Josh Sullivan’s pass was batted into the air and fluttered into the hands of Smith. Aided by a couple of blockers, he rumbled 29 yards to the end zone for a touchdown, which was capped off by a forward flip across the goal line.

Smith’s touchdown came after the Vikings had scored on a 4-yard pass from Kentrick Thompson to Jaevion Mims a minute earlier, and made it 14-0.

“I hit it, just looked up and it was there so I grabbed it. We work on that all the time, the tip ball drill, in practice, and it just pays off in the game,” said Smith.

Smiling, he added of his flip, “You just don’t see that every day. It’s exciting.”

Smith’s touchdown sent the Vikings’ bench into a frenzy, but the defense’s best moment might have come in the closing moments of the first half. A long interception return by Jarvis Durr set the Bulldogs up at WC’s 39-yard line, and they finally started to crack the wall.

Aided by a roughing the passer penalty, Brandon moved the ball to the 2-yard line where it had first-and-goal. A running play and a short pass were stuffed, and Doby Bartling threw incomplete on third down. Brandon settled for a field goal and went into halftime down 14-3, and the goal line stand gave the Vikings their swagger back.

Brandon picked up two quick first downs after receiving the second half kickoff, and then not another. It had three three-and-outs and one lost fumble on its final four possessions.

“That could have been a really big momentum swing going into the half. They bowed up and competed. The ball was down on the 2-yard line, and to me that was the ballgame. It was a big stand,” Warren Central head coach Josh Morgan said. “We knew they were going to come back with some urgency, and they moved the ball. Then we settled down, and I thought we were pretty good on third down most of the night, too.”

While the defense was dominant, Warren Central’s offense did enough to get by. Thompson completed 10 of 15 passes for 85 yards and one touchdown, and added 61 rushing yards on 18 carries.

Timothy Thompson scored on a 1-yard run with 1:30 left in the game that iced it, while Josh Griffin booted a 31-yard field goal early in the fourth quarter.

Warren Central only had 214 yards of offense, but with its defense giving it good field position most of the night that was enough. The Vikings’ three scoring drives totaled a combined 111 yards.