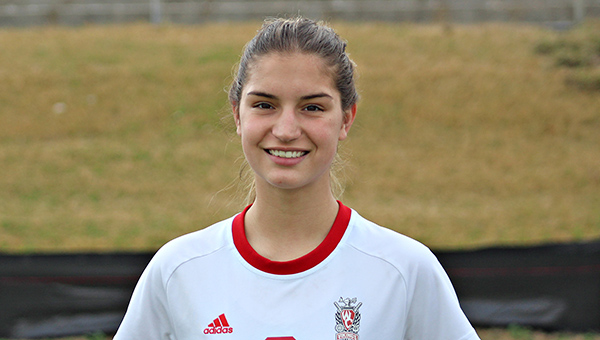 St. Aloysius soccer player Bree Butler scored two goals in a 7-1 win over Central Hinds on Monday. Butler has four goals in her last two games, both wins for the Lady Flashes.

After an early-season slump, the St. Aloysius girls’ soccer team is now on a winning streak.
Bree Butler and Elizabeth Theriot scored two goals apiece, while Madi Mathews added another to lead the Lady Flashes to a 7-1 victory over Central Hinds on Monday.

Mathews also led a solid defensive effort for St. Al (3-4), which has won two consecutive games after dropping four of its first five. It has allowed one goal in the two wins.

St. Al’s next game is on Sept. 21, at Washington School. It must win that game, as well as another district game against Bayou Academy at home on Sept. 24, to have a chance at reaching the MAIS playoffs.

Manchester tops
PCA in softball
Sydney Porter went 5-for-5 with a home run, three RBIs and three runs scored, and Lizzy Carpenter drove in five runs to lead Manchester Academy to a 13-6 win over Porter’s Chapel Academy in a fast-pitch softball game on Monday.

Porter and Carpenter each doubled twice, to combine for five of Manchester’s seven extra base hits. The Mavericks had 19 hits in all, and blew the game open by scoring five runs in the sixth inning and three more in the seventh.

Katie Tillman went 2-for-3 with a triple and two runs scored for PCA (3-15-1), while Olivia Masterson doubled, drove in a run and scored two. Raegan Thornell was 4-for-4 with one RBI, and Emily Phillipson had two hits and two RBIs.

Warren Central remains No. 5 in Class 6A poll