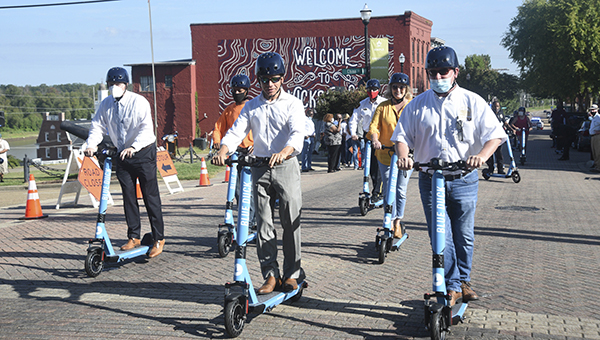 A flock of ducks took over a section of Washington Street Thursday.

San Antonio-based Blue Duck Express, which rents electric scooters as alternative transportation in urban areas, opened its first product launch outside of Texas and a group of local and tourism officials took to the street to try them out.

“It’s impressive to see a city like Vicksburg thinking about micro-mobility, especially in this environment,” said Michael Keane, Blue Duck CEO. “Vicksburg is very important to us and our growth. We’re also thrilled to be the first micro-mobility company in Mississippi.”

Blue Duck will have between 35 and 50 scooters at strategic locations in the city operating from 8 a.m. to 10 p.m. Scooters will be available in the downtown area bounded by First East Street on the north, Monroe Street on the east, Madison and Depot streets on the south and Levee Street on the west.

Using the app, the rider scans the scooter to unlock it and ride to their destination, where the scooter is parked.

Payment for use of the scooter can be made by a credit or debit card within the app. Money from the card is deposited into a “wallet” on the app and used to pay for the rides. The charge is an initial $1 fee and then 25 cents a minute, although the company cut the initial fee to 50 cents for this weekend.

Helmets are not required by state law while operating a scooter, but their use is encouraged. They are not provided by Blue Duck.

Mayor George Flaggs Jr. said Blue Duck’s operations here are being done at no cost to the city.

While duck season opens in November, District 5 Warren County Supervisor Kelle Barfield said, “When it comes to finding ways to improve the quality of life in our community it’s always open season on fresh ideas and excitement. I think we’re going to see a lot from this (public/private) partnership in the weeks and months to come.”

Pablo Diaz, president and CEO of the Vicksburg Warren Economic Development Partnership, said the scooters provide a new way for residents and tourists to see the city.

“Here is a way in which you can experience your community in a different way using a scooter,” he said. “It’s a completely different experience to enjoy our amazing architecture and our amazing history right here in downtown Vicksburg.”

Flaggs turned and pointed to the city’s waterfront and the floodwall murals.

City officials have been examining bringing Blue Duck to the city since November 2019. The board in January was able to get a local and private, or special bill, passed in the Legislature to allow the city to pass an ordinance allowing scooters in the city, making the city the first in the state to allow electric scooters on city streets.

While the recent news involving the number of cases of COVID-19 in Warren County has been good, the reports in... read more