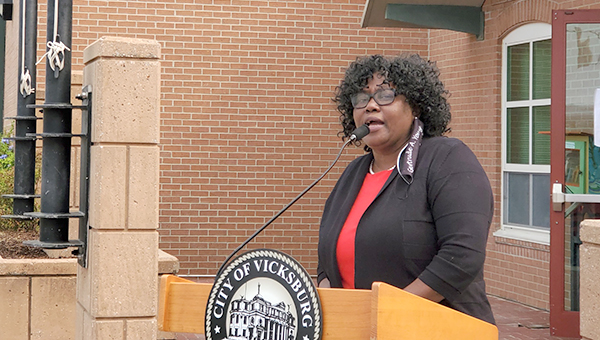 Gertrude Young stood in the small patio at the entrance to the Jackson Street Community Center talking to well-wishers coming for a ceremony naming the center in her honor.

Choking up with emotion, the former Alderwoman addressed the crowd that had come to honor her as well.

“It’s surreal; I’m trying to keep from crying,” she said. “It’s just a blessing. I appreciate everything the board has done.”

More than 100 people attended the ceremony Saturday honoring Young, who served three terms on the Board of Mayor and Aldermen. The Jackson Street Community Center was one of her top projects while in office.

“This is just a small token of our appreciation from the city of Vicksburg,” South Ward Alderman Alex Monsour said, adding Young did things “from her heart.”

It was built in 1924 with a donation from Fannie Willis Johnson, who also funded a YMCA for whites that was built a few blocks away on Clay Street. The Jackson Street YMCA served Vicksburg’s black residents during segregation and remained open until the mid-1980s.

Flagstar Construction Co. of Ridgeland was awarded a $1.586 million contract in 2000 to build the Jackson Street Community Center at the corner of Jackson and Monroe streets on the site of the former Jackson Street YMCA. It was dedicated in August 2002.

“I don’t know anyone who is more fitting to have this building named after than Mrs. Young,” former South Ward Alderman Don Miller said.

Recalling the building’s history, Miller said Young’s efforts to build the building “occupied a huge part of Gertrude’s life. The quality of life in Vicksburg is tops and this is part of it. Under her counsel and advice and pushing, it got built. This is a fantastic building.”

Willie Glasper, who was part of a committee appointed to restore the previous building, said Young’s perseverance to raise funds for the building project “was there out front. You couldn’t ask for a better leader to help you along with that plan.

“We wanted something that was going to represent this community and this part of town,” he said.

“All I can truly say is all that Mrs. Young put in this, you see it,” Glasper said. “And you don’t see all of it. The playground (behind the building) was a part of it. She didn’t want a swing and a seesaw, she wanted a topnotch playground for this community and she got that. This building serves this community well.”

Young “is a role model for all of us in our family,” her husband, John, said.

“I never thought something like this could happen to me,” an emotional Young said in her closing remarks.

“Not only are you honoring me today but you are also honoring my parents,” she said, pointing out that her parents moved their family from Indianola to Vicksburg to have a better life.

She recalled spending time at the then-Jackson Street YMCA.

“Not only did it have recreation and a swimming pool, but the main thing was the wisdom that we learned through this building,” she said. “Kids would come to listen to what the old men had to say. The kids came to listen and to have somebody to talk to.”

That was why the center was built, Young said. To provide a place where young people can go for constructive activity and the opportunity to receive the wisdom that helped her and others.

Young was first elected to the Board of Mayor and Aldermen in 1993 and served until 2005 when she lost her seat to North Ward Alderman Michael Mayfield. She ran for mayor in the 2013 Democratic primary as part of an eight-candidate field but failed to reach the general election.

She was later named the city’s housing director by Mayor George Flaggs and retired from that position Aug. 31.

The Board of Mayor and Aldermen in July approved naming the center after her in honor of her efforts to get it built.

“I think she deserves the credit to have something that would tell children and future generations that she made a contribution while she served. I think it is time to recognize her,” Flaggs said after the board’s action.