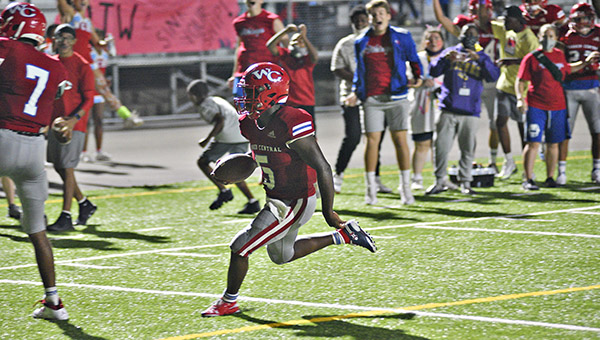 Warren Central quarterback Kentrick Thompson (5) scores the game-tying touchdown in the fourth quarter Friday against Pearl. Thompson ran for two touchdowns and threw a TD pass to lead the Vikings to a 28-21 victory in overtime. (Courtland Wells/The Vicksburg Post)

As Friday night wore on, Warren Central found itself in the familiar position of being locked in an early-season dogfight against Pearl. When it was over, it found itself in another position it is becoming increasingly familiar with — celebrating a victory.

Kentrick Thompson scored on a 1-yard run in overtime, his second touchdown of the game, and Warren Central’s defense shut down Pearl on its final possession to secure a 28-21 victory in an intense game at Viking Stadium.

It was the fifth time in six meetings that the winner between the teams was decided by seven points or less.

Warren Central (3-0) had not allowed a touchdown in its first two games, but had that streak end quickly Friday night when Jamari Thompson scored on a 15-yard run in the first quarter.

The teams went into halftime tied at 14 — Tre Hall scored two touchdowns for the Vikings, on a run and a 15-yard pass from Kentrick Thompson — and the story of the game in the second half was defense and special teams. Warren Central made a goal line stand after fumbling deep in its territory in the third quarter. Pearl (0-3) blocked a field goal and scored a defensive touchdown on an interception return by lineman Jalyn Nickelberry.

WC’s Jaevion Mims returned the ensuing kickoff 80 yards to the 5-yard line, and Kentrick Thompson scored from there to tie the game again at 21, with 7:57 left.

The Vikings got the ball first in overtime, and Kentrick Thompson’s 1-yard TD run on third down gave them their first lead of the night.

Pearl’s possession started with a 7-yard loss on a running play and skidded out of control from there. Two incomplete passes followed, and on fourth down the WC defense came up with a sack and a fumble to end the game.

“I don’t think we played our best game defensively, but they were very talented on offense,” Morgan said. “We made some big stops in the second half. It was a classic heavyweight battle.”