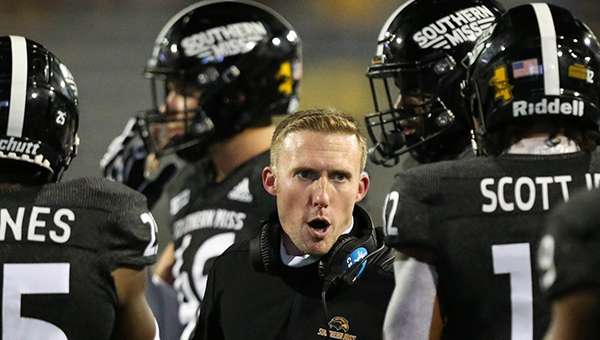 HATTIESBURG (AP) — Down to its last chance to complete a spectacular comeback, Louisiana Tech did it with just inches and seconds to spare.

Griffin Hebert made a spectacular 4-yard touchdown catch underneath the goal post with 14 seconds left as Louisiana Tech rallied from a 17-point deficit to beat Southern Miss 31-30 Saturday night.

On fourth down, Luke Anthony scrabbled around the pocket and then tossed the ball to Hebert, who made a two-handed jumping catch while being pushed by two defenders out of bounds. Hebert kept his left foot just inside the end zone. The play was initially ruled incomplete and reversed after a lengthy review.

“Obviously, that was a heartbreaker, that hurts. I think there’s a lot of things that we can clean up to fix that one. When you have a lead, 27-10, we have to finish that game,” Walden said. “My big message to the team was that we have to expect to win. When we’re up 27-10 there’s no excuse to let (Louisiana Tech) back in the game.”

An early decision came back to haunt Walden and the Golden Eagles. After they scored their first touchdown, on a 1-yard run by Kevin Perkins early in the second quarter, Walden called a swinging gate play on the conversion. Naricuss Driver was stopped, however, and the missing PAT wound up being the difference in the game.

Walden said the decision to go for two instead of one so early in the game stemmed from a tendency USM’s coaches spotted on film, and he didn’t regret the decision.

“I believe in our coaching staff and that’s something we said really since Monday in our special teams meeting as coaches,” Walden said. “I said when we score the first touchdown, that’s what I want to do. We felt great about the look on film. I’m just not going to be a guy that lives in regret. Obviously, that would have tied the game up in the end. We’re going to lay it all on the line and believe what we see.”

Anthony was 13-of-21 for 149 yards with three touchdown passes for Louisiana Tech in its season opener. All three TD passes came in the second half, after Anthony had replaced starting quarterback Aaron Allen and Southern Miss had built a 27-10 lead.

Hebert finished with five catches for 48 yards, including a 5-yard touchdown from Allen. Allen was 11-of-14 passing for 69 yards, with one touchdown and one interception.

Jack Abraham was 24-of-32 for 264 yards, with three touchdowns and an interception for Southern Miss (0-2, 0-1 Conference USA). Tim Jones had eight receptions for a career-high 160 yards and two touchdowns.

Southern Miss pushed the lead back to six on a 37-yard field goal by Briggs Bourgeois with 5:06 left in the game, but Anthony led Louisiana Tech back down the field for the game-winning drive.

The Bulldogs went 74 yards in 17 plays, converting three third downs along the way. Anthony fumbled a handoff to Greg Garner on second-and-goal from the 2, but was able to fall on the ball. Garner was stuffed on third down, and then Anthony tossed the game-winner to Hebert on fourth down.

Southern Miss’ last chance ended at midfield. Abraham passed to Jason Brownlee, and then lateraled to former Warren Central star Demarcus Jones who was pushed out of bounds as time ran out.

Jones finished with four receptions for 45 yards. Brownlee caught five passes for 27 yards and one touchdown.

By Patrick Murphy The Natchez Democrat NATCHEZ — Vicksburg High broke out of its offensive slump in a big way... read more