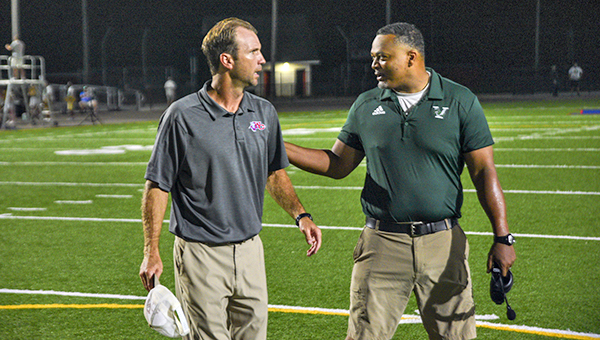 The COVID-19 pandemic has taken some things from us and changed a lot of others.

The 2020 spring sports season was obliterated in an instant. Facemasks became mandatory, and walking into movie theaters and restaurants now feels like walking into an old west saloon filled with angry gun-toting cowboys — if the cowboys were microscopic balls topped with cauliflower.

Some of these things we’ve adapted well to. Others, we’re still struggling to come to grips with. Among the items in the latter category are how to greet and congratulate someone.

Six months ago, a firm and simple handshake was acceptable for both tasks. Now, everyone does some weird version of the chicken dance, or a variation on the secret handshake of the Stonecutters.

A handshake is offered, until both people remember a second later that that is a social faux pas. One person audibles to a fist bump, while another goes for an elbow bump. Then they reverse gestures and laugh. It’s a complex procedure that makes us look like we’ve never met another human.

Postgame congratulations are an extension of this phenomenon, on a large scale. Groups of 40 or 50 football players instinctively head toward midfield, only to be reminded that they’re not allowed to do that anymore. So they stand 20 or 30 yards apart and awkwardly wave at each other, or throw up a hand in frustration and move on. Mostly, they stare at each other like cavemen meeting up for the first time.

The only postgame ceremony I’ve seen that worked was when Porter’s Chapel Academy and Deer Creek played each other a few weeks ago. One team lined up on the 40-yard line, the other on the 50, and they walked down the line like they normally would, waving and offering “good games” while maintaining proper social distance. It at least maintained the spirit of the traditional postgame handshake line.

If this is going to be our new normal, then we need to either standardize things or spice them up. When you go for an elbow or fist bump, add a flourish to it like “exploding the rock.” Throw a couple of dance moves in there.

In the handshake line, emulate the PCA-Deer Creek model or come up with something new. Like cartwheels.

Maybe we’re in the beginning stages of the evolution of these new sportsmanship ceremonies. A COVID-era standard will emerge.

I hope it happens soon. We’re all looking silly out there.