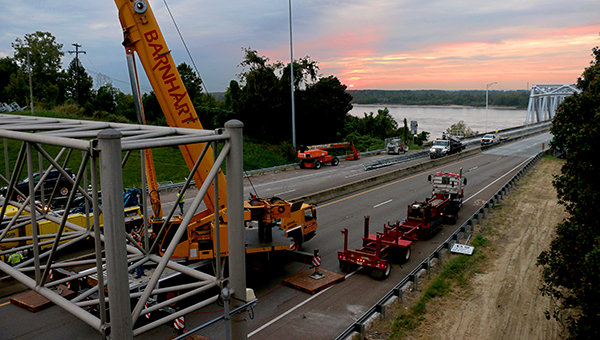 Crews with the Mississippi Department of Transportation work to remove a damaged truss from the sign on the Interstate 20 bridge Sunday evening. The sign and support structure were damaged early Sunday when an 18-wheeler overturned and struck the sign. Traffic both eastbound and westbound on the bridge were blocked. (Terri Cowart Frazier/The Vicksburg Post)

For those traveling east, the wait has been far longer.

At around 10:30 a.m., an accident involving an 18-wheeler not only shut down traffic eastbound from Louisiana but also caused damage to the support structure of a large sign that sits at the foot of the bridge near the Washington Street overpass. Vicksburg Police Chief Milton Moore said the driver of the truck received minor injuries and was treated and released. The cause of the accident remains under investigation.

While traffic eastbound was shut down shortly after the accident by Louisiana officials, the traffic westbound was shut down around 4 p.m. to allow crews with the Mississippi Department of Transportation to remove the damaged truss and structure holding the signs. But, even that work was delayed as the truck that wrecked hours earlier had yet to be removed and the fuel it spilled had to be cleaned up.

According to MDOT’s Mike Flood, the removal of the truss was still waiting on the environmental team to finish their clean up of the fuel.

Once the fuel was cleaned up, crews could begin the removal of the damaged truss. Flood said a replacement truss and sign would be installed at a later date. The delays from the fuel clean up and work on the truss could keep the interstate clogged until nearly 11 p.m.

The I-20 bridge at Vicksburg is the only road crossing of the Mississippi River for 150 miles between Greenville and Natchez. Detouring either north or south, if drivers can even reach the appropriate exits off of I-20, would take several hours.

“This has already put us back three hours,” Nicole Jackson, who was traveling to Dallas with Sunshine Ramirez, said. “We were supposed to get home at 8:51 p.m., now we are looking at after 1 a.m. or later.”

Mackenzie Williams, who is from Alabama, was supposed to meet a friend from Louisiana in Vicksburg, but that friend was stuck on the other side of the river.

“He is trapped on the other side of the bridge and I’m on this side,” Williams said. “It looks like we will have to meet another weekend.”

Thomas Casey, a Ponchatoula, La., native who attends Louisiana Tech, was just trying to get back to school. The 90-minute trip from Vicksburg to Ruston was going to take much longer than expected.

“I’ve been here for hours,” Casey said. “I will be here until they open it back up.”

MDOT’s repair work is being supported by the Vicksburg Police Department, the Warren County Sheriff’s Office and the Mississippi Highway Patrol.

As of 8 p.m., Warren County Sheriff Martin Pace said the traffic westbound on I-20 was backed up to near Bovina, which is more than 10 miles from the bridge.

Pace said his office has placed a motorcycle unit along the interstate to continue patrolling and respond to any emergency or medical situations that may develop with motorists stuck in the traffic.