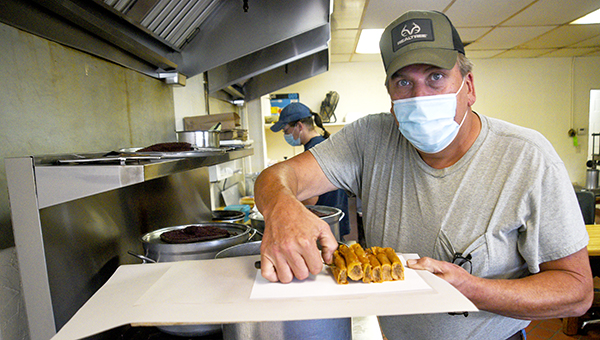 Chanah Crow drives from West Monroe, La. to get hot tamales from the Tamale Place, located on the South Frontage Road.

“They are the best,” Crow said.

The Louisiana resident isn’t the only one who thinks The Tamale Place’s hot tamales are tasty. The USA Today Reader’s Choice Awards has named the local eatery as one of the top 10 winners in the category of Best Hot Tamales in Mississippi.

“It’s just wonderful,” owner of the Tamale Place Allen Brown said, after finding out the news. “We strive hard to do what we have been doing for all these years.”

Brown, who opened the popular eatery 27 years ago, was no stranger to the industry.

Brown is the grandson of Henry Solly, who opened Solly’s Hot Tamales in 1939. The restaurant, which is now owned and operated by Jewel McCain, is located on Washington Street. Brown said he remembers spending many hours at his grandfather’s restaurant.

It wasn’t until after his grandfather’s death, Brown said, that his mother and sisters decided they wanted to open a business for themselves, and in 1993 The Tamale Place was opened.

Seven years later, after working in the sawmills, Brown came on board and has since inherited the business.

The recipe used for the tamales is the same one used by his grandfather, Brown said, and its ingredients include a blend of chili, a cornmeal mixture and meat.

Brown said he mixes up the cornmeal mixture four mornings a week, and on Tuesdays, he makes the chili, which he said is the “center” of the hot tamales.

A “special machine” is then used to form the tamales into a tube and then they are hand-rolled in corn shucks.

Brown described his tamales are “well-seasoned and moist.”

As to how many tamales he makes on a weekly basis, Brown said, “too many to count and not enough to retire.”

Crow said it was her late father who tipped her — and many of his friends — off to The Tamale Place. The friends would also make the pilgrimage to the River City for the tamales.

“When he would drive through Vicksburg he would always get some tamales,” Crow said.

On Monday, Crow and her mother picked up 11 dozen tamales. The pair admitted they polished off a dozen while sitting in the car, but the remaining 10, Crow said, would be frozen and eaten at a later date.

The top ten best hot tamales in Mississippi were chosen by a panel of experts who partnered with the USA Today Reader’s Choice 10 Best editors. The group picked the initial 20 nominees, and the top 10 winners were then determined by popular vote.

Those chosen as the Top 10 were: