Eagles regroup ahead of trip to Centreville Academy 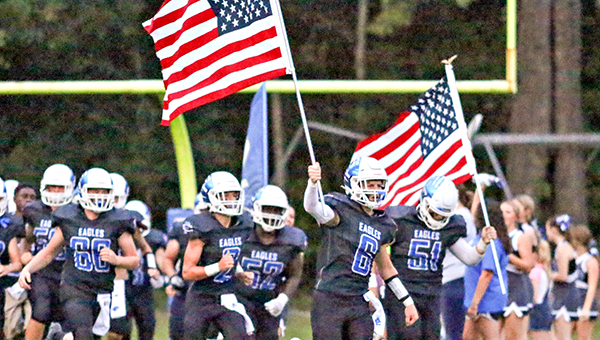 Porter’s Chapel Academy linebacker Gage Ashley (6) carries an American flag as he leads the Eagles onto the field earlier this season. Ashley and the Eagles will go on the road Friday to play Centreville Academy. (Walter Frazier/For The Vicksburg Post)

Porter’s Chapel Academy was riding high, with good vibes and its first three-game winning streak in seven years under its belt. The offense was clicking, the defense was hitting, and times were good.

Then came an ill-fated road trip to Jackson.

The Eagles were blown out last week by a Hillcrest Christian team that had been reinforced with several new players that transferred in from Jackson-area public schools. PCA was overmatched, did not play well in its own right, and lost 51-6.

Now comes the next step — putting that ugly loss in the rear view mirror, picking up the pieces, and moving on to another difficult road game this Friday at Centreville Academy (3-2).

“Last week was last week. We talked about it before we left the locker room that it’s over and done with, and we have to move on to Centreville,” PCA head coach Blake Purvis said. “We had mistakes and things fell apart on us, and we didn’t handle adversity well, but it’s over now. We can’t drag our morale down all week because of it.”

Focusing on what is still ahead is wise. PCA (3-2) has already matched its win total from the last two seasons combined, and won as many as three games for only the second time since 2014.
The early success, Purvis said, is helping the team weather what it hopes is just a one-week hiccup.

“Having some success, we can avoid it snowballing,” Purvis said. “We need to bounce back and have a good week, and get back to what we were doing for the three weeks prior to that.”

Friday’s road game at Centreville Academy marks the start of a difficult second half of the schedule for Porter’s Chapel. Three of its last five opponents have winning records at the halfway point of the season, and three district games against likely playoff teams — including three-time defending MAIS Class 3A champion Greenville-St. Joseph and a Greenville Christian team that has 23 transfers from public schools in the Delta — await in October.

Centreville is enjoying a bit of a resurgence after a 5-7 finish last season. Coach Bill Hurst has won more than 400 games in his career, and Purvis said beating him is always a challenge. Centreville beat PCA 44-6 last season.

“Centreville is going to do what they do,” Purvis said. “They’re going to be sound and disciplined, and at any point you ever play a Centreville team coached by Bill Hurst you’re going to get the most fundamentally sound team on your schedule. If you beat Centreville, you’ve earned that win.”

Fortunately, Purvis added, PCA seems to be in a better position — from a talent and morale standpoint — to earn it.

“We’re in a better position every week this year than in years past. We’re a much improved football team in many areas,” Purvis said. “We’ve had success and faced adversity, so we know both sides of it. We know what we have to do to win. With a good week, we’ll put ourselves in a position to get back to the brand of football we were playing a couple of weeks ago.”

ONLINE:
For full coverage on Friday, visit vicksburgpost.com and follow us at facebook.com/thevicksburgpost and twitter.com/vixpostsports