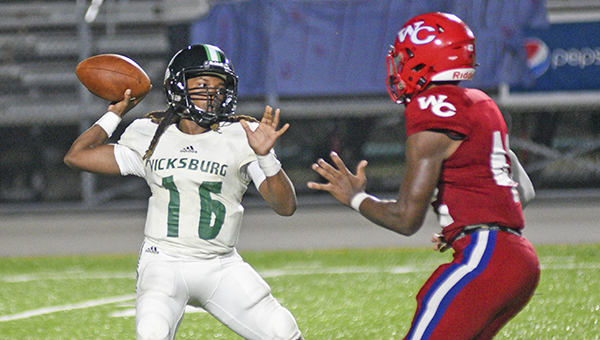 For two difficult weeks, the Vicksburg Gators were trying to grab on to any piece of success they could find. Once they found it, they’re determined not to let it go.

The Gators rushed for 379 yards as a team and scored 32 points against Natchez last week, nearly double their total yardage output from two shutout losses to start the season. It did not result in a win — Natchez scored a late touchdown to pull out a 34-32 victory — but did provide a shot of adrenaline heading into this week’s game against South Pike.

“It helps a whole lot,” Vicksburg coach Todd McDaniel said. “The biggest thing is for everybody to stay positive. The last three months we’ve had to change attitudes as far as winning was concerned, and I feel we are well on our way.”

The biggest boost coming out of last week was the emergence, at last, of the Gators’ running game in the newly-installed Wing-T offense. They only had 69 rushing yards in the opener against Warren Central and were shut out in that game and in Week 2 against Biloxi.

In Week 3 at Natchez, Sha’Kori Regan and Laurence Sullivan both ran for more than 100 yards, and running back Channing Adams finished with 83. Vicksburg averaged 7.6 yards per carry.

“We did show a lot of improvement. We made a few changes with our personnel, moved some people around,” McDaniel said. “Sha’Kori and Laurence had great vision the other night and saw their holes.”

Among the changes was one that turned a weakness into a strength. Regan was supposed to play quarterback this season, but suffered an injury to his left just before the opener. He missed the first game and lost a fumble during limited action in the second.

Rather than keep him on the sideline again, McDaniel put him in at the left wingback position. That allowrf Regan to take handoffs with his good hand. At the same time, McDaniel moved the backup quarterback Sullivan to the other wingback spot — where he spent most of the preseason — and inserted freshman Ronnie Alexander at quarterback.

Regan finished with a team-high 127 yards and one touchdown against Natchez. Sullivan had 118 yards and two TDs, and Alexander ran for a pair of short touchdowns.

“Sha’Kori had an issue with his wrist, and not being able to use his left hand to its full capacity. We moved him to left wingback so he would be able to take handoffs without the cast getting in the way,” McDaniel said, adding that the move could become permanent if the offense continues to click. “He’s a natural runner, and he’s a big, physical runner. (Alexander) played great and (Regan) played great.”

With some momentum building, the Gators (0-3) will now have to turn around on a short week to play South Pike (2-1) on Thursday night. It’s officially their home opener, but will be played at Warren Central’s Viking Stadium because of construction at their own stadium. The venue is also why the game is on Thursday — Warren Central has a home game Friday vs. Germantown and has first dibs on playing dates.

McDaniel didn’t expect the quick turnaround to be too much of an issue.

“That’s why we practiced Sunday morning, so we would get our three days of work in,” he said. “We probably won’t make any contact Tuesday or Wednesday, and save it for Thursday.”

Another intangible issue the Gators are preparing for is bad weather. The remnants of Tropical Depression Beta are forecast to move through the area Wednesday and Thursday, and could dump as much as 4 inches of rain on Vicksburg by the time it moves through.

McDaniel did not expect the game to be postponed because of the storm, but was practicing this week with wet weather in mind.

“We’ll probably practice with a wet ball on Tuesday, and if it rains we’ll go outside. We won’t stay in, so we can see what it’s like to play in it,” McDaniel said.

ONLINE:
For full coverage on Friday, visit vicksburgpost.com and follow us at facebook.com/thevicksburgpost and twitter.com/vixpostsports

Eagles regroup ahead of trip to Centreville Academy

Porter’s Chapel Academy was riding high, with good vibes and its first three-game winning streak in seven years under its... read more