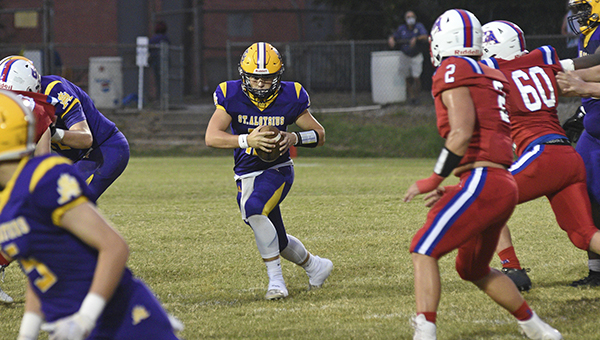 When he started looking at film and the roster of this week’s opponent, St. Aloysius coach Stacy Sizemore felt his heart sink a little.

In other words, Copiah Academy will be another in a long line of difficult opponents on St. Al’s schedule, rather than the pushover opponent the Flashes beat by four touchdowns last season.

Three of St. Al’s first five opponents have winning records at the halfway point of the season. Four of the next five are above .500, including district rival Copiah (3-2, 1-1 MAIS District 3-5A) on Friday night. For a young team measuring victories in small doses, Sizemore said, it’s a rough road they’re all trying to navigate as best they can.

St. Al (2-2, 1-0) has two wins this season, but both are forfeits. Inexperienced and undersized — only six seniors are on the roster, and one of them has been lost for the season to a torn ACL — the Flashes have been outscored 143-12 in four games on the field. While remaining optimistic, Sizemore admitted it has been an uphill climb against one of the toughest schedules in MAIS Class 5A.

“I feel like we’re Vanderbilt in the SEC,” Sizemore said with a chuckle. “You’re just going to go in and fight every week and take small victories. It’s a big grind on a team with the numbers that we have.”

To their credit, the Flashes have continued to play hard and compete despite their struggles. They nearly returned the opening kickoff for a touchdown last week against Riverfield Academy and got defensive stops on two of the Raiders’ first three possessions.

Riverfield, the defending MAIS Class 4A champion, eventually took control of the game and won 44-9. St. Al, however, kept it close for most of the first half and scored its first touchdown of the season midway through the fourth quarter on a 19-yard pass from Tristan Wilbanks to Carter Magee.

The touchdown came after another long scoring pass from Wilbanks to Chase Tucker was wiped off the board by a penalty. Even though it was a meaningless touchdown as far as the game’s outcome, Sizemore said it was a huge play in the bigger arc of the season.

“You’ve got the monkey off your back,” Sizemore said. “Getting those points helps the kids and coaches mentally. We know we have the ability to do it. We just have to correct our mistakes. It gives us the mindset of, ‘We can do this.’”

Sizemore said the positive momentum has carried over to this week, which has allowed them to work on other facets of the game. He feels the Flashes are improving, even if the difficult schedule makes it hard to have much to show for it in terms of wins and losses.

“The next step this week is to try to eliminate mistakes on defense and see if we can get better. We’ll work on tackling and getting off blocks and things of that nature,” Sizemore said. “Even though the score and record don’t indicate it, we are much better than we were (in a preseason scrimmage) against Brookhaven Academy, and we’re going to keep working and keep fighting.”