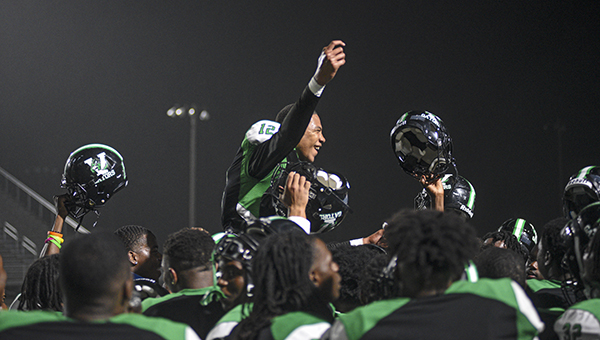 Vicksburg High kicker Chris Williams (12) rides on his teammates’ shoulders after kicking a 25-yard field goal to beat South Pike 23-22 on Thursday. Williams’ kicked capped the Gators’ comeback from a 22-point deficit in the second half. (Courtland Wells/The Vicksburg Post)

In a span of six days, the Vicksburg Gators were a part of two fantastic finishes.

This time, they got to celebrate at the end.

The Gators scored on their last four possessions, capped by a 25-yard field goal by Chris Williams as time expired, to overcome a 22-point deficit and beat South Pike 23-22 on Thursday night.

It was the second game in a row for Vicksburg that was decided in the last two minutes. Last week, it gave up a late touchdown and lost 34-32 to Natchez. This time, it was on the right side of the score. It was also the first time Vicksburg has ever beaten South Pike. South Pike had won all six previous meetings, the last of which came in 2004.

“Last week, our kids never really quit. We just didn’t have the know how or the knowledge to win games. Last week, we made a lot of strides. This week, we finished the deal,” said Todd McDaniel, who notched his first victory as Vicksburg’s coach. “They never quit. They put together a great second half and we were able to win the football game.”

Laurence Sullivan ran for 114 yards and a touchdown for the Gators (1-3), and Channing Adams finished with 75 yards and a TD. Freshman Ronnie Alexander completed 4 of 6 passes for 102 yards, and added a 1-yard rushing TD.

The Gators’ defense did just as much as the offense down the stretch to pave the way for the comeback. It only allowed two first downs on South Pike’s last three possessions, came up with a big fourth-down stop in its own territory to end the third quarter, and got a three-and-out late in the fourth to set up the game-winning drive.

“Those guys never stopped playing. They squared up and they kept fighting. South Pike is a tough, physical football team. We just had to find a way to stop them, and we stopped them in the second half,” McDaniel said. “Once the offense smelled a little blood, they got going. I thought we played up to our potential. I was happy about that.”

Vicksburg only had 87 yards of total offense and trailed 22-0 after South Pike quarterback Chris Royal scored on a 1-yard run — and Kam Reynolds added a two-point conversion run — with 5:13 left in the third quarter.

The Gators quickly faced a third-and-8 on their ensuing possession, and that’s when things started to get interesting. Sullivan, a wingback, took a handoff coming from the right edge, hit a hole on the left side of the line, and then got into the clear. He outran South Pike’s defense to the end zone for a 67-yard touchdown that gave the Gators a spark of life.

“We just said we’re tired of losing, and there’s nothing that’s fixing to stop us from winning this game,” Sullivan, said. “The first half, we were playing kind of timid and kind of down. Then something just clicked and we started playing as a team.”

South Pike turned the ball over on downs at the VHS 44-yard line on the final play of the third quarter, and again it only took Vicksburg three plays to get into the end zone. A 17-yard pass from Alexander to Sullivan and a 20-yard run by Sha’Kori Regan set up Adams’ 18-yard TD run up the middle.

A South Pike punt gave the Gators the ball back at their own 4-yard line with 8:51 remaining in the game. They drove 96 yards — 42 of it coming on a juggling reception in double coverage by Keveon Smith — and scored on Alexander’s quarterback sneak.

The two-point try was no good, leaving the score at 22-20 with 4:08 left but also leaving just enough time for a fantastic finish.

A three-and-out by South Pike gave Vicksburg the ball near midfield with 1:47 to go. A long pass moved it into the red zone and two runs centered the ball for Williams. The senior kicker, who missed three PATs last week, set his mark on the 15-yard line as a misting drizzle settled over the field.

The snap and hold were clean, and Williams sent a low line drive through the uprights as time expired to both redeem himself for last week’s misses and complete this comeback victory.

“I was just making sure I stayed focused and trusting in my teammates. After the fact, I was grateful for the people that put me in that position and then for my coaches having faith in me to make that game-winner,” Williams said, adding of seeing the kick go through, “It was nothing but happiness. I couldn’t do anything else but run. It filled my body with energy. No words can explain that moment.”