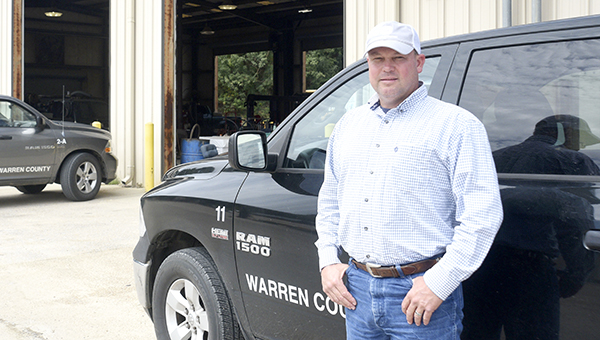 According to the Code of Mississippi, the county road manager is appointed by the board of supervisors, administers the county road department and supervises “the working, construction and maintaining of the public roads and the building of bridges in the county.”

It’s a big job and a big challenge, especially with Warren County’s present road problems caused by heavy rainfall during the spring rains combined with the annual responsibility of keeping regular maintenance on county roads.

And Jamie Cain, the county’s newly appointed road manager, believes he’s up to the job. Cain’s promotion was finalized Monday at the Warren County Board of Supervisors’ regular meeting.

“It’s a lot of challenges with the roads and the prior storms and we have some people ready to retire, but we’ll get through them; we’ll be able to overcome,” he said. “I’m looking forward to it. It’s a challenge and I like a challenge.”

Cain, who was the county’s assistant road manager, was hired by the board to replace Larry Flowers, who died in May.

He started on the debris truck, became a construction foreman and was later named assistant road manager.

Cain said the biggest challenge for the road department is trying to keep up with the continuous repairs still remaining from the spring storms, when other projects also need to be addressed.

“We try to split it both ways,” he said. “Try to take care of the safety issues first, of course, and we have our maintenance.”

Other issues outside of that, he said, “We try to take them as they come.”

Besides dealing with the roads, the road department is also responsible for taking care of the county’s rights of way and drainage issues.

“We address those daily as well, starting with the potholes; keeping the potholes and the asphalt roads maintained,” he said.

The daily maintenance also involves removing debris from roads, keeping the grass cut on rights of way, and repairing large holes in roads that wash out.

“Then we have our excavator crews that keep the ditches clean and the culverts,” Cain said. “The crew also takes care of the driveway pipes and small rock failures. That’s just our basic everyday maintenance.”

Cain said the transition from assistant road manager to road manager will not be too big a change, since working with the department’s crews was part of his job as assistant.

“Workwise, everything will be the same, and I’m going to fill the positions that were void (vacant) while they tried to fill the road manager position,” Cain said. “We’re going to try and pull these people up so we can get some help and maybe things will be going smoother.

“I’m looking forward to having the opportunity to represent the road department and hope to make a positive impact on the county.”