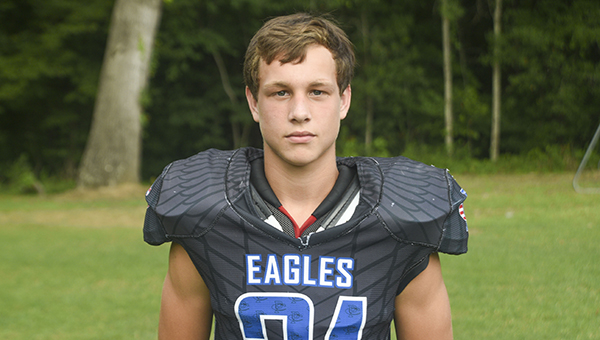 Porter’s Chapel Academy’s Brayson Morson returned a kickoff for a touchdown, his second of the season, in a 46-16 loss to Centreville Academy on Friday.

No loss is particularly pleasant, but this seemed to be one that Porter’s Chapel Academy coach Blake Purvis could live with.

The Eagles forced some turnovers, did not commit any of their own, had some offensive success, and even some chances to stay in the game. In the end, however, they simply couldn’t keep up with a better Centreville Academy team and lost 46-16 on Friday night.

Centreville eased out to a 24-8 lead at halftime and then pulled away in the second half.

“We played a good game. We stopped their run game. We played a physical game, probably more physical than I’ve seen one of our teams play in a long time. We forced them to drive the field, which they’re good at,” Purvis said. “We did not lose that game. We got beat by a good football team.”

Quarterbacks Jace Riggs and John Wyatt Massey were a combined 9-of-24 passing for 125 yards, with Ra’Darius Turner the top receiver with five catches for 86 yards.

Ricky Carraway recorded eight tackles, while Gage Ashley had six tackles and forced three fumbles. PCA forced four fumbles in all, but could only recover two.

“They put the ball on the ground several times, and we did not turn the ball over. In a physical game like that, that was definitely a plus,” Purvis said. “I thought our offensive line and defensive line played great all night against a bigger, physical front. We gave our quarterbacks some time. I was pleased with our effort.”

PCA (3-3) lost its second game in a row after winning the previous three. It will try to get back in the win column next Friday when it hosts the New Orleans Home School Saints for homecoming.