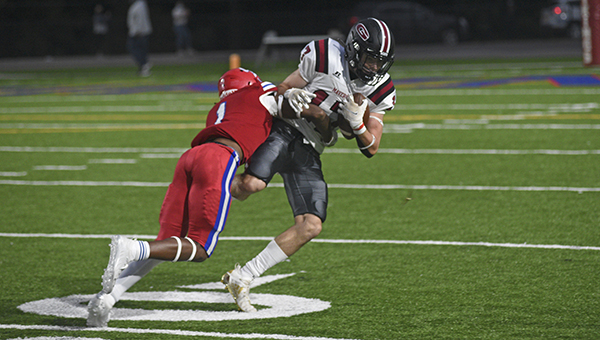 Some people spend their entire lives trying to figure out who they are and how to succeed with it. It’s taken Warren Central four games.

The Vikings’ defense had three interceptions, including one that was returned for a touchdown, recorded a safety and held Germantown to three points in the second half to win 23-10 Friday night in the Region 2-6A opener for both teams.

It was the kind of gritty, grinding defensive performance that is quickly becoming Warren Central’s calling card. In its first four games, WC has allowed a total of three offensive touchdowns and 34 points.

“We’re trying to be opportunistic. To be able to win in different phases and use every team, special teams included, and to find edges to win, because that’s what we have to do,” Warren Central coach Josh Morgan said. “We look for those ways, find those edges, and hopefully have everybody prepared for that moment and be ready to seize it and don’t back down from it. We have to win in different ways, and we’ll ride whatever that is.”

Although it was only the first game of the region schedule, it was a big one for Warren Central (4-0, 1-0 Region 2-6A). With four playoff spots for six teams, and only five games total, each one within the league is essentially a playoff game. Winning the first one sets WC up nicely to face perennial power Madison Central in two weeks.

The Vikings will earn a forfeit win next week over Greenville, which originally opted not to play this season over COVID-19 concerns but recently elected to play a limited non-region schedule.

“This is a big win. You and me both know how big it is down the road,” Morgan said. “I’m proud of how we played. I thought we were very opportunistic defensively, and we really put our stamp on the game, especially in the second half.”

The game was largely a defensive slugfest throughout, but Warren Central turned the tide in its favor with several big plays.

In the final minute of the first half, Tevin Bell intercepted Colton Gardner’s pass in the red zone to end a Germantown scoring threat. Bell returned it 59 yards before running back Branson Robinson ran him down at the Germantown 36-yard line.

“Tevin is one of the best players I’ve ever coached, and he got two big (interceptions) tonight. That was an opportunistic one and I’m really surprised he didn’t score because Tevin is very explosive in the open field. That was a big play in the game,” Morgan said.

Then, on the third play of the second half, Tre Hall broke off an 86-yard touchdown run to put Warren Central ahead 14-7. Germantown answered with a field goal, but the Vikings never trailed again.

Warren Central’s defense scored all of the points in the fourth quarter. With 9 ½ minutes left, defensive end Taylen Smith tipped a pass high into the air, caught it at the 7-yard line and ran into the end zone for his second pick-six of the season. The first was on a nearly identical play two weeks ago against Brandon.

“That’s something we work on in practice all the time. Tipping the ball, pursuing to the ball, and never giving up on a play,” Smith said. “We came to the sideline and everybody said, ‘That’s two!’ I’m shocked.”

Bell intercepted Gardner again on Germantown’s next possession. It did not lead to any points, but it did set up a punt by Riley Lampkin that was downed at the 1-yard line. Nick Barnes was stuffed in the end zone for a safety on the very next play to push Warren Central’s lead to 23-10 with 4:44 to go.

The sequence was a fitting capper for a performance that is quickly becoming the norm for the Vikings — a handful of points on offense, combined with some key plays on special teams and a suffocating defense. They’re hoping it’s a formula that takes them a long way this season.

“In a perfect world, that seems like something you don’t want to do. But nothing is ever perfect. We knew coming into the game it was going to be a hard fight. We just had to push through it,” Smith said. “It defines Warren Central. We’re coming back to the old Warren Central. Warren Central is back.”

No loss is particularly pleasant, but this seemed to be one that Porter’s Chapel Academy coach Blake Purvis could live... read more