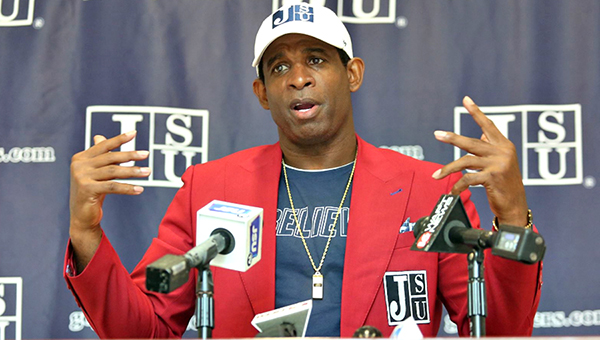 Sports column: Sanders’ hire is a different move for the SWAC

For all of its great tradition, when it comes to college football, the Southwestern Athletic Conference practically exists in its own universe.

The SWAC has not participated in the Football Championship Subdivision playoffs since the mid-1990s. Although it plays the MEAC champion for the national title among Historically Black Colleges and Universities, the conference championship is the primary goal each season.

And, given the fact that two of the MEAC’s best teams are joining the SWAC in 2021 and a third is bolting for another league, the conference title might be the only realistic goal soon.

The league’s head coaches, too, are an insular group. It’s rare when a SWAC school looks beyond the conference’s borders or its alumni family to fill the position. Those that are fired seem to recirculate within the league but have a hard time breaking out of it. The ones that have success don’t get a lot of opportunities at bigger schools.

For all of those reasons, Jackson State’s decision to hire Deion Sanders as its next head coach is intriguing — not just because Sanders is a cultural icon and a football legend, but because it is such a radical departure from the norm.

The last time a SWAC school made a move like this was when Alcorn State brought Jay Hopson aboard in 2012. He made headlines as the first white head coach in the league’s history, but what really made him stand out was the different mindset he brought with him.

Hopson, a career assistant to that point, had worked only at Football Bowl Subdivision programs before coming to Alcorn. He, as well as the Alcorn administration, brought different methods and goals to the program that were bigger than just muddling along as a backwater country college. They saw the potential for Alcorn State to be a regional school for western Mississippi, and to use a successful football program as a bridge to wider appeal.

Sanders, it seems, has that same approach. During his introductions he spoke about elevating Jackson State to a higher level both competitively and in terms of national awareness. Like Alcorn’s braintrust a decade ago, Sanders, acting JSU president Thomas Hudson and athletic director Ashley Robinson view a winning football program with a famous coach as a catapult to bigger and better things for the entire university — higher enrollment, more alumni engagement and donations, better marketing opportunities, etc.

The plan Sanders laid out went a step further. By coming to Jackson State, he hopes to shine a light on what the SWAC and HBCUs as a whole have to offer.

If it works, it could usher in a new era for the SWAC and HBCUs. Other schools will likely make similar moves, as often happens. Enthusiasm could grow across the board, and the quality of players might rise to what it was in the SWAC’s glory days.

If it doesn’t work, it could be a disaster. Both Sanders and Jackson State must have enough patience with each other to navigate through a year or two of rebuilding the roster, small budgets, and grumbling from the fans if success is not immediate.

Here’s hoping it does work. If Sanders can turn around Jackson State the way Hopson and his successor Fred McNair did Alcorn State, it will reinvigorate the SWAC and HBCUs as a whole, and the entire state of Mississippi by proxy. Either way, all eyes will be on the SWAC when it kicks off its football season in February, and that’s a great thing.