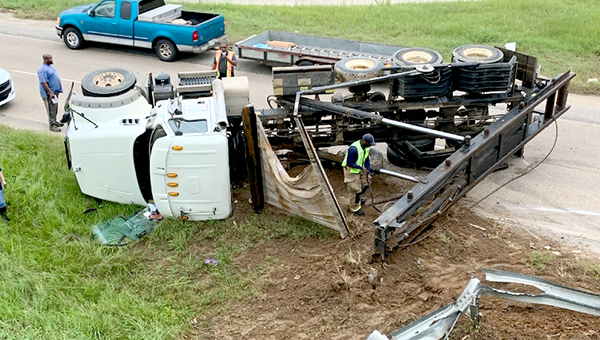 Just after 8 a.m. Monday, a Vicksburg-Warren County Landfill truck overturned on Clay Street entrance to I-20 westbound. The driver of the vehicle was treated at the scene by Vicksburg Fire Department paramedics for minor injuries. (Vicksburg Police Department photo)

Traffic on East Clay Street was backed up for more than two hours Monday after a Vicksburg-Warren County Landfill truck overturned at Clay Street entrance to I-20 westbound.

Vicksburg police Sgt. Bobby Jones said the wreck occurred about 8:18 a.m. the driver, McKinley Ragsdale, 51, received minor injuries in the wreck and was treated at the scene by Vicksburg Fire Department paramedics.

Ragsdale told officers he had just left the U.S. Army Corps of Engineers Vicksburg District property after making a run with a roll-off trash bin and had the truck’s lift up. The lift struck the underside of the I-20 overpass crossing the entrance ramp, causing the truck to overturn.

Jones said westbound traffic on East Clay was diverted to Berryman Road while the truck was righted and removed and authorities waited for Mississippi Department of Transportation bridge inspectors to check the damage to the overpass.

Just as Abraham Lincoln saw Vicksburg as the key to the South, the new owners of the Outlets of Vicksburg... read more