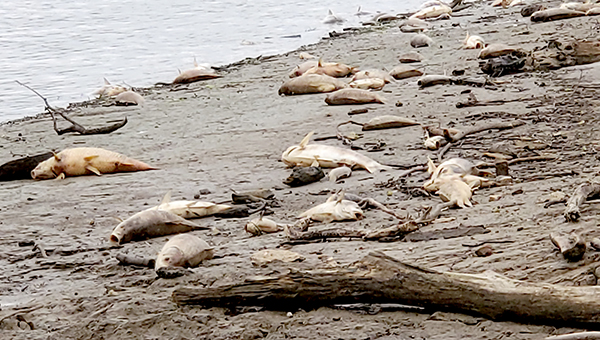 Hundreds of dead fish lined Vicksburg's river following a fish kill that began at the Steele Bayou Control Structure and made its way down the Yazoo River into the Yazoo Diversion Canal. (John Surratt/The Vicksburg Post)

MDEQ: Fish kill possibly due to low oxygen in water

Low oxygen in the water caused by opening the gates at the Steele Bayou Control Structure is believed to be the cause of a fish kill in the Yazoo River that extended to the Yazoo Diversion Canal in Vicksburg, a Mississippi Department of Environmental Quality spokesman said.

Robbie Wilbur, the spokesperson for the Mississippi Department of Environmental Quality, said the department’s staff investigated the fish kill over the weekend “And although the report has not been finalized, it is likely the kill was caused by low dissolved oxygen beginning at Steele Bayou due to the opening of floodgates because of excess rainfall.”

According to the MDEQ report, the fish kill on the Yazoo River in Warren County was reported to MDEQ about noon Saturday.

Biologists with the MDEQ launched a boat at the Clay Street boat ramp at City Front about 3 p.m. and saw dead fish floating in the channel at the boat ramp.

Based on their condition, according to the report, the fish appeared to have been dead for several days. The majority of the dead fish were silver carp but the biologists also saw smallmouth buffalo, bigmouth buffalo, freshwater drum, blue catfish, channel catfish, several white crappie, and several bream. Most of the fish were very large in size.

The biologists said the trail of dead fish ended at Steele Bayou and no dead fish were upstream of Steele Bayou on the Yazoo River.  Large schools of fish were also seen swimming at the surface near the Steele Bayou structure, according to the report.

The biologists said they contacted the officials with the U.S. Army Corps of Engineers Vicksburg District and talked to Drew Smith, chief of the district’s Water Management Section, who said the gates were fully opened on Sept. 24 after heavy rainfall in the area to prevent flooding.

“Dead and dying fish are often the first indication that a problem (caused by pollution or natural causes) has occurred on a water body,” Wilbur said. “MDEQ staff are trained to respond to fish kills including addressing whatever situations may have caused the kill.

“In addition, MDEQ investigates these kills because if the cause of a fish kill proves to be pollution-related, we have the regulatory jurisdiction, as well as the technical expertise, to address the issues,” he said.

“It was perfect. Everything was set. We had all of the rooms booked,” Hannah Holliman said. “I didn’t think we... read more