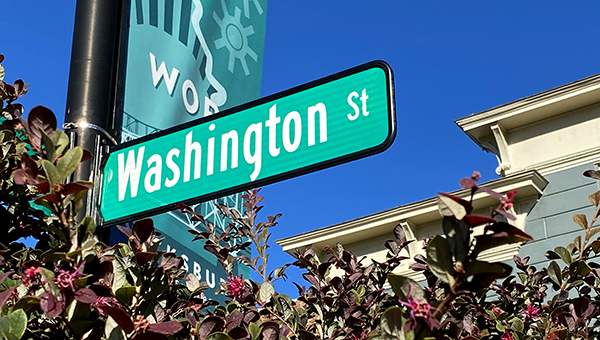 The Board of Mayor and Aldermen Wednesday approved a resolution transforming Washington Street between Clay and South streets one-way for pedestrian access from 7 p.m. to midnight Fridays and Saturdays for the month of October beginning this weekend. (Tim Reeves/The Vicksburg)

Washington Street will be one-way on Friday and Saturday nights beginning this weekend.

The Board of Mayor and Aldermen Wednesday approved a resolution transforming Washington Street between Clay and South streets to one-way going south for pedestrian access from 7 p.m. to midnight Fridays and Saturdays. Thursday, Mayor George Flaggs Jr. said he was extending the one-way traffic to Veto Street to include the Chopping Block, a recently opened business that offers ax throwing. Flaggs’ announcement came at a ribbon-cutting for the business.

“We’re going to do it this week and then ratify it Monday (when the board meets),” he said.

Flaggs said business owner Kevin Roberts told him he will have a food truck and other activities “and we don’t want to cut it off in front of his business.”

The board’s action means restaurant operators in the restricted area will be able to place tables for patrons on the sidewalk and in parking spaces in front of their businesses.

Flaggs said, for now, traffic will be restricted to one-way on Washington between Clay and Veto only during October.

“We’re going to do it for a month and then we’re going to re-evaluate it. We might just have it once a month, we don’t know,” he said.

Flaggs said the signs and barricades to block one lane of traffic are ready to be installed on the streets.

Flaggs proposed making the two-block section of Washington Street one way as a way to increase pedestrian traffic and businesses for the restaurants in that area.

The board initially approved a plan to block off Washington Street between Clay and South that was to start on Labor Day weekend. It was later delayed a week and then scrapped because of a lack of customer traffic.

Flaggs first proposed making Washington Street one-way on Sept. 9, but later dropped it after receiving opposition from a small group of people.

He changed his mind and announced Sept. 21 he was going ahead with the one-way street plan.

Local officials say trick-or-treating will be allowed this Halloween

It does not appear COVID-19 will stop Halloween in Vicksburg and Warren County. Mayor George Flaggs Jr. said Wednesday he... read more